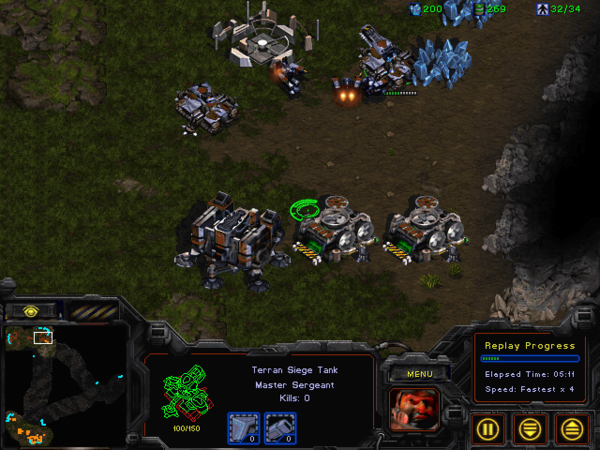 The "Siege Expand" is one of the oldest and most reliable openings for Terran against Protoss. It is a very conservative opening, designed to help a Terran's attempt to take a Fast Expansion, while also being safe against most aggressive strategies by Protoss. In modern Protoss vs. Terran the build is less common, as it sacrifices boosting the own economy in a more efficiently than it is possible with other openings.

However, the Build Order is usually still recommended for beginners in their early career. The safety the opening offers compensates any disadvantage. If this build is used properly, it still is a powerful tool in the Terran strategy arsenal. Furthermore, it still is a recommended opening whenever the map or the own judgement suggests a more aggressive opening by Protoss can be expected.

The opening uses a so-called "SCV Cut" (or worker cut) in the first minutes. The second the Factory is being built, two SCVs are taken off gas and are only sent back to mine once the Factory finishes. A few techniques can be used by beginners to memorize these steps. On most modern maps, such as Fighting Spirit, the Depot and the Factory can be built both at 16 Supply. One SCV harvesting gas can be told to build the Depot via Short Cuts and be told to move back to the Geyser via queued up commands. The second SCV building the Factory can be ordered to return to mine gas in the same manner. To queue up the building commands, the SHIFT key has to be pressed while instructions to build Depot / Factory and move command are given.

The rest of the opening is straight forward. Units are not used to engage in fights early on, instead the Siege Tank and the first Marines are used to defend against Zealot or Dragoon pressure. A Engineering Bay is only needed if Terran has to suspect incoming drops or Dark Templars. It should be left out if there is no necessity to defend against Shuttles or cloaked units are approaching. Minerals are instead spent on an earlier second Factory.

If any aggressive opening with Shuttles (Dark Templar or Reaver drop) or a Dark Templar rush is anticipated, the number of Turrets should be minimized. Against Dark Templar a single Turret in the Natural Expansion is enough, while three Turrets close to Choke Point, Natural Command Center and main base Command Center are enough to defend against very fast Reaver Drops.

Against all other kind of early aggression, Dragoon / Observer attacks for instance, a good building placement at the Natural Expansion is helpful. A Depot in combination with the original Barrack can shield the Siege Tanks from the smaller ranged Dragoons. Against "Bulldog Pushes" with a Shuttle well placed Turrets are a requirement.

Transitioning out of the opening is done according to the usual method. It should be noted that any mid game timing attack is most likely harder to perform, especially for beginners, as the training of units is delayed. If a mid game attack is prepared, further SCV cuts might have to be considered. It should also be noted, that strong scouting and harassment by Vultures can make up for the fewer amounts of Siege Tanks and the potential to press further with an attack force rather well.

Theoretically speaking, the biggest threat to Siege Expand openings are Bulldog strategies by Protoss. In these scenarios up to 12 dragoons and a Shuttle with four Zealots are used to break the Natural Expansion. However, this can be scouted fairly easy by Terran. Whenever the threat is revealed, Turrets, well positioned Siege Tanks and good building placement should be done by Terran.

Other than that, modern Fast Expansions at least soft counter the Siege Expand. If Protoss expands fast with one Gateway before Nexus, Terran will have a hard time to counter, as Protoss will be able to defend. However, if Protoss opens with a Nexus first, there are various ways to alter the own build order.

All maps support Siege Expand, it's not limited to any special features. However, maps with a close third expansion spot, preferably an in-base mineral only, generally support the strategy. Examples for such maps are Jade, Electric Circuit and Sniper Ridge.