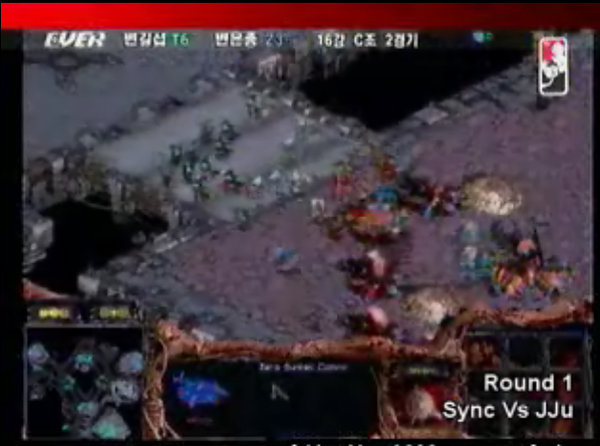 The "Sparks" or "Fireworks" Terran (from the Korean 불꽃 / Bul Kkot) is a Terran build, trademark of the Terran Player Sync that aims to kill the wall of Sunken Colonies at a Zerg's natural expansion with a large infantry force. The name derives from the animation of destroyed Sunken Colonies, similar to fireworks. The Terran forgoes a Factory and instead pumps infantry from 3 Barracks for a timing attack.

The moment the Academy should be built depends on the variation of the build being used. In order to time an infantry upgrade correctly, the Terran player must delay his Academy to get an Engineering Bay just after his Refinery is started. Some Terran even take SCVs from gas after gathering the first 100 gas for the upgrade.

The most viable of the upgrades is Attack. The Armor Upgrade is only effective in the first hits from the Sunken Colonies. After the Marines have engaged, a good Medic force (4~6 Medics) can keep the Marines that are being targeted alive. The Attack Upgrade delays the third Barracks resulting in a smaller force, but gives more power against a Mutalisk follow-up.

The attack should come right before Zerg has Lair tech units (either Lurkers or Mutalisks), and thus the build is particularly strong against 3 Hatch builds and weak against 2 Hatch builds. The typical attack force consists of about 2 control groups of infantry, with 4-6 Medics, 2-4 Firebats, and the rest Marines.

Before engaging the Sunken wall, it is important to scout it with a SCV (to save Scans in case of Lurkers finishing during the attack). Infantry should be still for 1 second after the first Stim to let the Medics heal them before engaging. The infantry groups should be as close as possible when attacking with all of them being in range, with the Medics going in first, followed by the Firebats, with the Marines at the back.

Micro should not be excessive in the attack as it hurts the healing from the Medics. 4 or 5 Marines from the group should pick off Zerglings or Drones coming in to support, while the rest focus fire on the Sunkens. Firebats should be protected from being surrounded.

It's vital for the Terran to reinforce his army because reinforcing before attacking forces the Zerg to constantly morph Sunkens and thus sacrifice drones. Even if the attack fails, the lowered Drone count gives the Terran a better chance in the mid-game.

Hotkey the sunkens and manually focusing fire with 2 sunkens on 1 marine.

The build is highly adaptable. On maps with tighter chokes, the Terran must build more Firebats and Medics and rush in as close as possible to allow all marines to hit the wall. On maps with wider choke points, the player must keep his Marines behind protected by Medics and Firebats and to avoid surrounding.

The build is specially effective in maps where Zerg have to build 2 Sunken walls (such as Rush Hour) or maps where the Zerg must 3 Hatch to protect his expansion and main (like on R-Point).

This build is no longer popular due to the advent of the Fast Expansion builds. When one base builds used to be the norm, it was simple to hide the third barracks and disguise the Sparks Terran Build as a normal build. However, now that one base bionic builds are extremely rare, it is very hard to keep the Zerg from getting suspicious. An alternate build that attacks with the same timing, but opens with a Fast Expansion is the 4 Barracks Build or the Ayumi Build. Nevertheless, the uncommonness of the build has become a strength, and many opponents will be confused by this build.