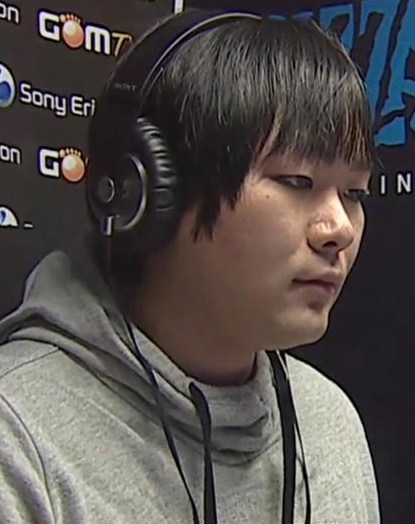 [2]Sync is probably the most unknown out of all OSL winners. He debuted in the progaming scene in Hanbit Stars. He sneakily cruised easily through the group stages of the Coca-Cola Starleague, only to be hit hard in the Round of 8 which included the likes of Boxer, Yellow and IntoTheRain.

After some poor performances in the KPGA leagues, his breakout was the NATE Starleague, where he managed to defeat the likes of fOru, ChRh and then eventually H.O.T-Forever in the finals 3-1.

Sync then started to fall into one of many slumps, after the Panasonic OSL, failing to make another OSL until the 2004 EVER OSL. Meanwhile, in the MBC Leagues, he started to show up into the leagues, though not performing well. During this, he transferred to KTF along with Reach, leaving behind a formerly great team in trouble without their star players. He was also invited to the annual KT-KTF tournaments, but with unsatisfactory results.

He eventually snapped out of his slump, showing back his impressive Sparks Terran form from a bygone era, with some brilliant games showing his style, against Siva, JJu and Eliza. His impressive performance in EVER 2004 was short lived however, as he was taken down in the quarterfinals by Boxer. After this, some league appearances by Sync with uninspired results would cause another slump.

Near the end of his career, Sync was a poor performer for KTF, only appearing in very few 1v1 games. He was mainly used as a mentor/2v2 player.

The nickname Sparks Terran derives from the build Sync used to demolish his Zerg opponents, which was a 3 barracks -> +1 Weapons -> Academy build, with lots of firebats and medics. This build, along with Sync's aggressive micro, would break through any tough sunken line.