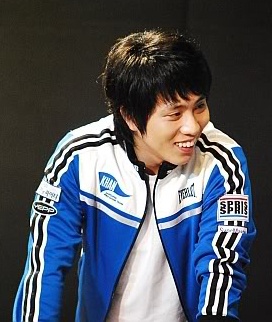 Park Sung Hoon was one of the youngest progamers to play a televised game in his day. At the young age of 17, he played his first televised games in the GhemTV Starleague. He performed poorly, going 1-2 overall. However his unique style was quickly exposed. Sung Hoon would be the master of the proxy strategies and cheese rushes. While at the time, fans had a mixed response to this, this would ultimately lead to him being labeled a "newb" by most of the community.[1]

He would find some success in his 2nd GhemTV appearance. His proxy/cheese rush style would be great for one-off matches. And consequently he scored wins against great players such as Seo Ji Hoon (Xellos) and Kim Jeong Min (TheMarine) but sadly, his strength did not lie in non-cheese games and crumbled against Park Jung Suk (Reach) preventing his advance any further.

In Proleague and Teamleague he performed well for Samsung KHAN, scoring wins against Elky and Grrr in relatively quick succession, but could not be counted on for results when it mattered. And for this reason Sung Hoon never got that far past group stages in any major tournament. Also, qualification for these tournaments would be up in the air, as his style was a very chancy one.

Sung Hoon would find his strength in 2v2. He, along with his partner Kim Geun Baek (Saferzerg) would be Samsung KHAN's primary 2v2 team from 2003 to 2004. He was also considered KHAN's main 2v2 force, even pairing with Choi Soo Bum (DoGGi) on Neo Jungle Story in some matches. Sung Hoon's 2v2 effort would go in vain until 2005, when KHAN picked up the valuable Lee Chang Hoon (Sigamari/Zerglee) who was the 2v2 specialist from SKT T1. The two would become the 2v2 force behind KHAN's strong Proleague run in 2005.

Despite being the 2nd half to the 2v2 team, he received little credit as Chang Hoon took all the fame. Being a Zerg player allowed him to play in all team matches on all map, and thus gained far greater exposure. Nevertheless, the two were a formidable team.

Sung Hoon made a strong 1v1 effort in 2006. He broke into Shinhan 2 OSL, where he proceeded to cheese his way over Hong Jin Ho (Yellow) (which angered many), cheese through the wildcards and then get out-cheesed by Lee Yoon Yeol (NaDa) in the Round of 16. After this OSL effort he moved on to MSL, where he did poorly as well.