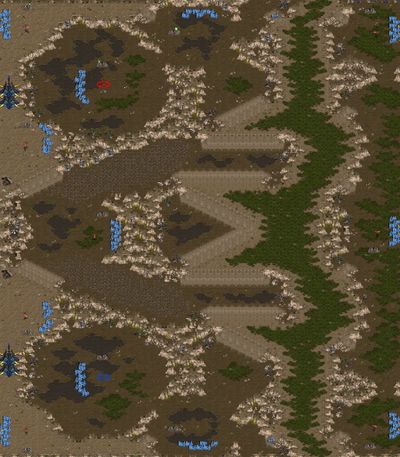 Taebaek Mountains (태백산맥) is a Starcraft: Brood War map created by [Ragnarok]Valkyrie. It was introduced in the Afreeca Starleague Season 1 and has not yet been used outside of this one tournament.

News of the map being selected for the ASL Season 1 was posted on TeamLiquid in May, 2016.[1] Version 0.90 - initially called Taebaek Sanmaek by the foreign community - would go through several changes both before and during the tournament. Version 1.1 and 1.2 soon followed[2], with new weaknesses being identified as play continued. The final iterations (versions 1.9 and 2.1) were titled New Taebaek Mountains (신 태백산맥)(download link)[3]; version 2.1 would be used for the remainder of the tournament.