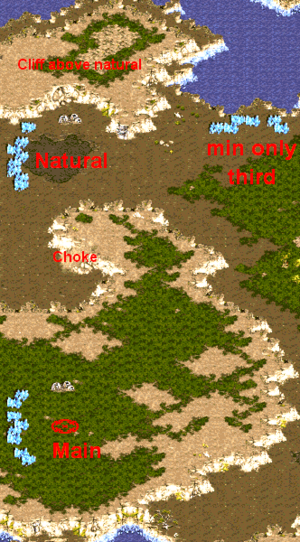 Some of the features that define your natural expansion:

A choke is a narrow pathway or area that creates a funneling effect when moving through it. Similar to high ground, a choke massively favors the defender over the attacker. Examples of a choke include ramps and narrow passageways. If someone refers to 'the choke', they usually mean the narrowed entrance to the natural, as the choke separating the natural and main base is usually just called the 'ramp'. Chokes are very important tactically because they can be used to maximize the efficacy of your units while minimizing the opponent's.

The same principle can be applied using mineral patches; position your Marines, Firebats or even Zealots behind the opponent's mineral patches, as they will be very hard to surround. All other things being equal, this will ensure your units inflict the maximum damage possible and will require your opponent to actively micro against your units in order to kill them.

Ranged units gain tremendously from using chokes. For example, in large Dragoon vs. Dragoon battles, the side that has more space will have an advantage because they will have a greater number of ranged units able to attack simultaneously compared to their opponent. Picture a funnel with the narrow side being filled by one Dragoon army and the wide side by another. The Dragoons on the wide side can attack all at once, while the other army only has a very low number of attacking Dragoons at any given time. This advantage means that a smaller Dragoon army can defeat a larger one if it has the wide side of the choke. Be aware of this advantage and in ranged vs. ranged battles try to lure the opponent into a choke and maximize the number of units you have attacking at any one time. If caught in a choke, it is often useful to "step forward" with your units, to ensure all of them are within attacking range and therefore dealing damage.

In ZvT, Zergs often secure a ramp by positioning two Lurkers on high ground. In early or early-mid game these are difficult to remove without suffering great losses because the Terran lacks space to spread his Marines. If you take into account the advantage high ground gives on top of this, it is clear why Terrans avoid directly confronting Lurkers that are defending a ramp.

Any expansion on the map consisting of only minerals and no vespene gas.