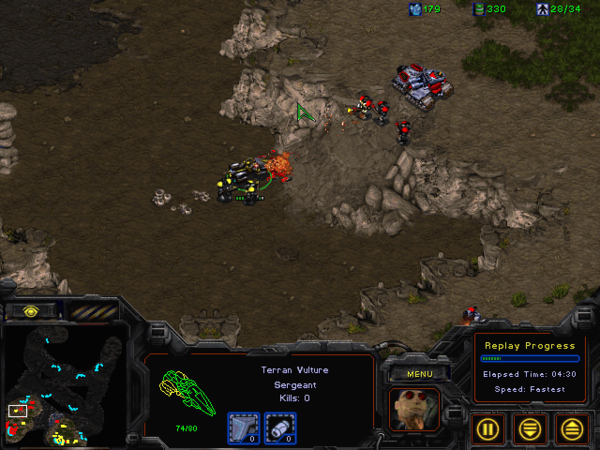 The Terran vs Terran match up is a difficult match-up for newer players to learn as it revolves so much around players being able to adapt to what they see their opponent doing. The rock paper scissors mentality of mirror match-ups revolves around being able to not just play a build, but change a build, something that can be a difficult concept to grasp. This article moves to remove the ambiguity from the timing that comes while playing certain builds in TvT.

In Terran vs Terran a player's build cannot really be determined until a Factory is up and running, and for that reason scouting usually occurs from when a Terran places their Barracks to when they place their second Supply Depot. Obviously the later a person scouts the later they find out what an opponent is doing. Early scouting can also be a good to in flushing a Vulture with four Marines rush, an early play option in TvT. When you scout is determined by:

The scouting SCV is basically looking to make sure that nothing is out of the ordinary. What you do about what you see inside of their base depends on if you plan to go One Factory Fast Expand, Two Factory Pressure, or One Starport. Remember that you may need to match their unit count on some level in the event they attempt to push out with a Vulture and four Marines. Some things that you could see inside of their base:

If your opponent is playing One Factory Fast Expand, you have pretty much free reign to go ahead with whatever opening build you planned on following. A Two Factory build against a Fast Expanding Terran will still be effective for a contain, while a One Starport Wraith build will still be viable for harass.

Oftentimes, it will be necessary to scout a second time to check their unit composition if using a floating building is too slow. Most of the time, the initial scouting SCV will not survive to see a second factory, a Starport, or a command center. In this case you must scout in some way, using a second SCV or using a small rush. There are too many variables in TvT to rely on one scout; there must be constant scouting going on, more so in a mirror match-up than in any other match up. 1 factory just mean's he's playing normal. There will be definite tells if you look at his unit count and expo timing. If they have not expanded on time according in comparison to your chosen build, then they are planning for some kind of rush.

While "Standard" mid game play in Terran vs Terran could be considered Tanks, Vultures, and Goliaths pitted against each other in drawn out battles TvT, like any mirror match up can really go in so many different directions. Things like Wraith and Dropship play are still very viable in mid game as well as playing risky expansion builds. It is important for a Terran to know what sort of game flows can come out of mid game and maintain their versatility in order to be successful at mid game and be able to hold their own heading into late game play.

Scouting is much easier in TvT than in other mirror match ups because Terran has access to the Comsat Station, an invaluable tool for a Terran considering how to play their mid game. While mirror match-ups make for standard play when two players use the same builds, any deviation from standard play leaves for risks and payoffs. If a player is able to minimize their own risk while abusing their opponents' then they will see the maximum payoff from their builds. This all starts from being able to scout well.

Unlike in TvP and TvZ where you go straight for their expansion, TvT timing attacks are aimed at the map. Everything prior to that timing is preparation for seizing map control. Say for instance, you scout your opponent starting to mass Factories. You can exploit this timing by moving out and creating a small wall of sieged tanks. He cannot afford to attack your wall because he will lose more than he will gain because he invested too much in factories. Therefore, you use this timing to expand. Another common case is if he is playing extremely safe to secure one expansion. If he sends 8 tanks to defend one expansion, that is 8 less tanks he will have defending his side of the map. You can take this timing to contain the bulk of his army while you can take two expansions. The reason why doubling up in TvT is not as risky as it is in TvZ or TvP is because minerals are your excess resource; the limiting factor in most TvT armies is the gas. Therefore you can afford to lose 1 Command Center and keep the other. If there are no timings or if you missed all of them, then you must secure map control the hard way- with strategy and mechanics.

End game in TvT is known for its long, drawn out Dropship play. This in itself does not allow really for very many adaptations. There is an exception to this rule: Terran's opponent may attempt to Retech to Battlecruisers. Terran will need to scout the mass placement of Starports and then attempt a Timing Attack in order to punish the re-tech. Failure to do this will surely not end in favor of the player unable to adapt.

Battcruiser retech is spotted by Terran's opponent placing many Starports. Once Terran is able to scout the Starports they will need to make a move against their opponent in order to prevent the Battlecruisers from coming out. Once they are out there is not a lot that Terran can do with their ground forcs: few units in the Terran army besides the Goliath are equipped to deal with air power.

If Terran is unable to prevent the arrival of Battlecruisers to the field they will need to use aggressive Goliath play in order to take down the Battlecruisers.