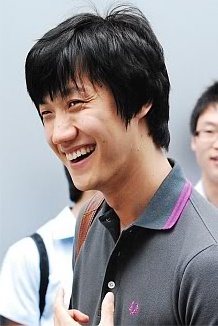 Kim "TheMarine" Jeong Min is a retired StarCraft progamer from South Korea who played Terran for KTF MagicNs. He is currently a commentator for OnGameNet.

TheMarine was one of the most promising Terran players playing for the GO Team (now CJ Entus), known by the Korean community as 'By-the-book Terran', for always executing straightforward strategies and very rarely deviating from standard play. After the KTF MagicNs bought him off GO in mid-2003, his career began to decline and he was never able to reproduce his success from during his time on the GO team. TheMarine is an excellent example of the supposed KTF Curse (where players bought from other teams would slump and never reproduce the results they had on their old teams).

TheMarine retired in early 2006 and became a commentator for OnGameNet's Proleague coverage, quickly becoming a fan favorite. In late May 2009 he was drafted for military service and announced that he would leave OGN's Proleague team to do his service in the Army.[1]