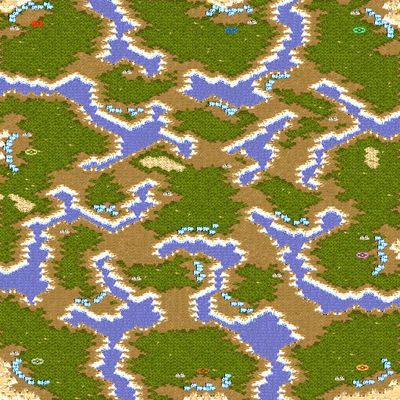 The first version of The Hunters was made by Blizzard designers and released with StarCraft in the default map directory. More commonly known as an unskilled map on Battle.net, this map made its way into the 2008 Shinhan Proleague. The features of this map make the results of the game very positional based, hence luck is also arguably needed for victory.

Blizzard released a remade version of the map on October 9th, 1998[1] as part of their Map of the Week service. This new version had increased the resources of each mineral patch and gas significantly. Big Game Hunters, as the new version was called, soon became very popular among a lot of players.

Zergs aren't good on The Hunters because of the lack of expansions and the fact that they need many expansions. They also need more gas than the T and P opponents they are fighting. On FFA's things are made especially bad for them since everyone will be trying to secure their expos. Zergs may not be able to get an expo and have to play onebase. Zergs are also bad on FFA's because they will have make very tough decisions about powering (making drones for economy for late game) or making fighting units.