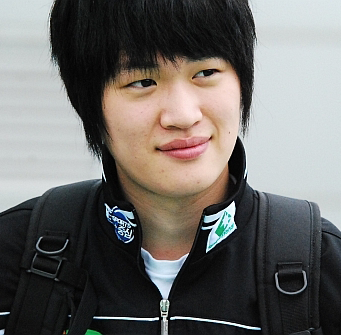 Type-b appeared as a new and very promising up-and-coming Zerg on Hite Sparkyz (then OGN Sparkyz) although he was often left in the shadows by his fellow Zerg teammates, YellOw[ArnC] and Hogil. In his earliest days as a progamer, Type-B auspiciously showed a strong win rate against Terran in an age when ZvT success was rare( early on during the mech revolution) which many saw as indicative of his skill. Type-b's breakout came during the 2008 Club Day Online MSL, where he was one of only 3 Zergs to reach the Ro16, along with teammate YellOw[ArnC] and Jaedong. He lost to his teammate 1-2 in the only Zerg vs Zerg series of the league. Shortly following this, he began to transfer, or perhaps tap into a latent ZvP ability; defeating strong opponents: Pure, Best, Stork and BackHo, allowing him to reach the round of 8 of the 2009 Bacchus OSL where he defeated his teammate Leta 2-1. Once again he met YellOw[ArnC] in the Semis but was knocked out with a losing score of 0-3.

After his strong run in the Bacchus OSL type-b was frequently chosen for the Hite team lineup in the 09-10 Proleague alongside fellow Hite zergs YellOw[ArnC] and HoGiL. He showed strong results in round 1, finishing with a record of 4-2. During this time, he qualified for the 2009 Nate MSL and prepared for his seed into the 2009 EVER OSL. Despite his strong showing in the proleague, he was knocked out of the MSL in the round of 32 with a 0-2 record and losses to Kal and ZerO. He went 0-2 in his Round of 16 OSL group with losses to Kwanro and Stork and had to beat Flash to force a tiebreaker. On the final day of the OSL round of 16, Flash dismantled type-b on Eye of the Storm, knocking him out with a 0-3 record.