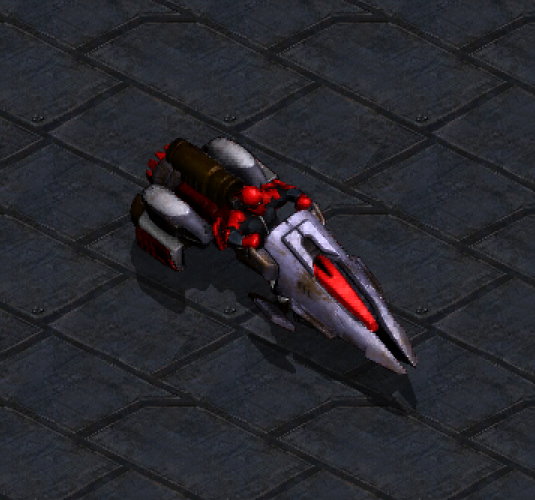 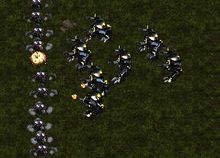 The Vulture is an extremely mobile and dangerous Terran unit produced from the Factory. Vultures are the epitome of cost-efficiency; properly microed, they can take down an unlimited number of some units and Spider Mines give them further unique potential cost-efficiency. Vultures move quickly enough to be able to kite down most melee units (including workers) without risk, making them powerful in the early game, but deal concussive damage, greatly reducing their power against larger targets, and only attack ground units, forcing them into a role at best complementing a main army. The primary reasons Vultures fall off is that their speed and range give them mighty survivability against many units, but when the enemy inevitably acquires greater speed and range they are made much less exploitable.

The upgrades for the Vulture are the Ion Thrusters, which increase movement speed making Vultures the fastest units in the game, and Spider Mines, which provide each Vulture three Spider Mines to plant (and only ever three, with each Vulture). Spider Mines are a one-shot splash explosive planted invisibly that erupt onto enemy units and charge toward them. Spider Mines are a powerful addition to the Vulture, extending its usefulness into the later game and each are capable of instantly killing many units and crippling about all others. They only attack units that are on the ground however: this immunity extends to hovering units like workers and other Vultures making them useless for their functions against certain units, although the mines still deal splash. These mines also attack cloaked units even without detection. They can be taken out without dealing damage, however, with enough range and damage per second or detection, since they have an acquisition range of 3 units.

Since Vultures have been blessed with the acceleration and attack mechanics of air units (along with a few other ground units) a key part of modern Vulture play is moving-shot attacks, which allow more responsive micro. Simply put, the proper way to micro Vultures against is to be running away from the enemy units and patrol click behind your Vultures. This will allow Vultures to attack and then quickly move forward at the same time.

A Vulture's Spider Mines can be used both defensively and offensively, by placing mines in the path of units or surrounding them and planting. In different situations it might be better to be mining up the map or to place your Spider Mines in a tight line. Mining the map allows you to see where your opponent is going just like burrowed Zerglings. You might want to spread Spider Mines throughout the map to slow down an opponent; conversely, you can place Spider Mines in a tight line against units with a high rate of fire. It is necessary to do so because units with high rates of fire can kill Spider Mines before they detonate and then they can at least be used to delay them at a given point, powerful in conjunction with Siege Tanks.

These are researched at the Machine Shop add-on.

Due to their fragile nature, high speed and concussive damage, they need to be microed against slower small melee units (like Zerglings and Zealots), while mostly avoiding other units with their speed.

Vultures excel at worker harassment; they are capable of killing Probes in two hits and Drones or SCVs in three hits, and can clear an unguarded expansion quickly. In larger groups, it is not uncommon for them to destroy one or two Photon Cannons, and continue killing Probes.

Vulture spider mines are very useful to trap choke points and pathways, delaying an enemy until they get detectors or damaging a mobile ground army. Spider mines are permanently cloaked and buildings cannot be constructed or land on them, so mines can be placed to delay an expansion. Mines do splash damage to all ground units but cannot target hovering units.

The standard Mech opening in Terran vs. Zerg play tends to include a single Vulture for harassment. The typical Zerg counter is placing a single Sunken Colony at the Natural Expansion to guard against a Vulture run-by. A Sunken Colony will kill a Vulture in three hits, so a Vulture may be able to run past a sunken colony after taking two hits; thus, many Zerg players attempt to block or obstruct the vulture from running past the Sunken Colony by placing buildings and/or Zerglings in the way. On many maps, it is difficult to both prevent the run-by and to protect the Natural's mineral patches, so exploiting this weakness is a must. It is common to force a Zerg to retreat Drones from his Natural Expansion with just a single vulture. The Fantasy Build variant of Mech can involve vulture drops to harass the Zerg in the mid-game.

Vultures normally require three shots to kill a drone. However, it is worth noting that if two Vultures hit a single Drone simultaneously, they will kill it. With skillful timing, you can exploit this facet to make your Vultures more effective at worker sniping. After a single Mech Weapons Upgrade, two hits will almost always suffice.

Spider Mines also have uses. They can be used to distract the enemy or reduce the maneuverability of enemy forces and sometimes to protect from Lurker attacks. However, mines can backfire if the Zerg player decides to attempt Mine Dragging. Generally, spider mines are less useful against Zerg than Protoss due to Hydralisks and Mutalisks being able to defuse mines more easily than Protoss units.

Vultures are generally very useful in early game TvT. They do full damage to Marines and excel at scouting (particularly with the Ion Thruster upgrade to run from other Vultures). In addition, Spider Mines can be effectively used for both defense and containment.

Vultures are used sparingly in the late game, due to their reduced attack against Mech units such as Siege Tanks and Goliaths.

The Vulture is considered a staple unit in standard TvP. Fully upgraded Vultures, with their Spider Mines, are instrumental to the Terran army's success. Due to their high concussive damage, and the high explosive damage of the Spider Mines, they are used to screen the more valuable Siege Tanks from Zealots and are also useful in absorbing damage from Dragoons.

During the early game, Spider Mines are also a deterrent from early Protoss aggression. The Fake Double Build takes advantage of the Spider Mine to keep Dragoons at bay while the Terran sets up an expansion. Due to the capability of Spider Mines to target cloaked units, they can also serve as defense against Dark Templar when the Terran lacks other forms of detection. Skilled players are able to trap Dragoons with Vultures, and use mines to kill the Dragoons.

It is not uncommon to see packs of Vultures in TvP simply laying down mines over the map, at expansions, and at major chokes. If the Protoss player is not attentive, units may be lost to strategically placed mines, or expansions can be easily delayed by a mine.

During the late game phase, players may choose to lay mines inside their base to counter an Arbiter recall.