When XellOs was 12 years old, his father died and thus he grew up together with his mother and sister. He decided to become a pro-gamer, a decision that wasn't welcomed by his mother. In an attempt to hinder XellOs' plans, his mother moved his computer out of his room and into their living room. XellOs found it difficult to practice when his mother was watching him and used to wait until she had fallen asleep to play.[1]

In 2003, XellOs vaulted onto the Korean pro-gaming scene, and claimed stardom from then on. During the Olympus OSL, XellOs achieved an astonishing win rate of 70%. He was undefeated on the map Bifrost and hence claimed his nickname, “Perfect Terran” (his winning streak was eventually ended by NaDa). XellOs successfully advanced from the round of sixteen with a perfect 3-0 defeating Mumyung, (Oops)Lee and the favourite gnome cowboy, Chojja. Losing only to the ZvT monster Junwi, XellOs advanced from his round of eight group. In the semifinals, XellOs achieved a major upset over the Emperor, Boxer with a convincing scoreline of 3-0. The Storm Zerg, Yellow would be his opponent in the finals and was also in pursuit of his first OSL title. The match went into the deciding fifth game where XellOs emerged the victor. XellOs received his OSL title while YellOw remained “Mr. Consistency” and “Mr. Second”.

One year later, XellOs was crowned the WCG 2004 champion. Although he was heavily favoured to defend his WCG title in 2005, he was defeated by Silent_Control in the elimination round, and his teammate fOru eventually took the title. XellOs's journey to the 2005 WCG Grand Finals was the subject of a documentary by the National Geographic Channel, the first time such in depth coverage had been offered to a pro-gamer on international television.[2]

XellOs played the MyCube OSL round of 8 match against Reach in Reach's hometown of Pusan. The live audience yelled jeering comments at XellOs. When XellOs lost, he was caught on camera mouthing the word "fuck" in frustration. Some admonished XellOs for unprofessionalism and immaturity while others defended him stating that it was a stressful situation and the 19-year old would not know when a close-up on camera would occur.

After having fallen into a slump, XellOs earned his moniker of the "DDR Terran" from an Ongamenet program that visited the training houses of the pro-gaming teams.

Xellos spent 2 years at the Air Force, competing for the ACE team. Upon release he returned to CJ Entus.[3] He retired from progaming in December 2011.[4] 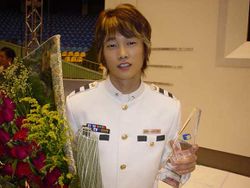 XellOs after his OSL win. 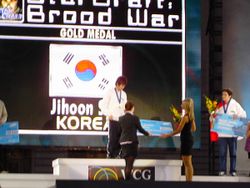 XellOs at the 2004 WCG medal ceremony.