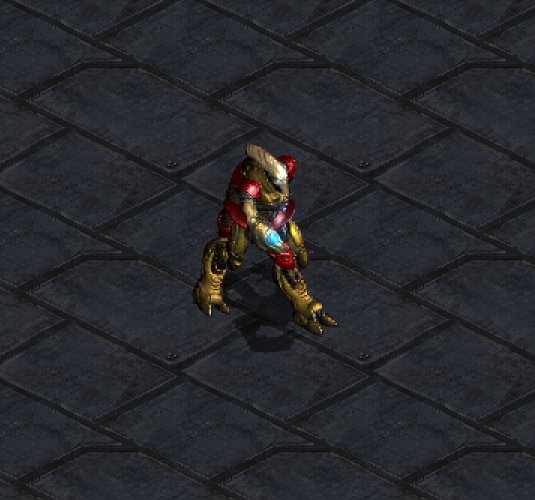 The Zealot is the Protoss first tier melee unit. Zealots only deal damage to ground units, so are vulnerable to air attack units. They are very robust attack unit with its 160 health and quite cost-effective with a cost of 100 Minerals. Zealots are constructed at the Gateway without additional tech buildings. The Zealot's movement speed can be increased through the Leg Enhancements upgrade via the Citadel of Adun.

Each Zealot attack consists of two separate hits. Consequently they deal 16 (2x8) damage (or 2x9 damage after +1 upgrade). This is important for damage calculations, because armor reduction is applied to each hit separately. The Zealot's attack, armor, and Plasma Shields can be upgraded at the Forge.

Zealots are commonly built and used in all race match-ups due to their relatively low cost, movement speed, and potent attack. Because the Zealot only deals damage to ground units with its melee attack, they are often paired with Dragoons or Archons as these attacking units are ranged attacked units that can also attack air units.

Zealots are commonly built as part of the early game in the PvZ match-up. When employing the popular fast expansion builds, the Protoss player will build Zealots early on to force the Zerg player to build Zerglings, rather than expanding and teching up too quickly.

Common variations of this early game pressure usually involve one to three Zealots and possibly a Dragoon to deny Overlord scouting. The scouting Probe may also be used to help a Zealot snipe Drones. This concept of early pressure is similar to that of Terran moving out with a small Marine & Medic force in the window before the Zerg player has Mutalisks to force Sunken Colonies. Both attacks force the Zerg to sacrifice Drone production to defend themselves. Zealots may also be used to expand on ramped maps with a backyard or ramped natural expansion (for example: Andromeda, Loki II, God's Garden).

During mid-game, Zealots with the Leg Enhancements upgrade can be used in combination with High Templars against masses of Hydralisks. Since Zealots cost about the same as Hydralisks but have double the health, it is often worth storming groups of Hydras, even if it allied Zealots are also damaged during the casting of the spell.

Zealots are vulnerable to ranged attackers like the Lurker, as the Zealot needs to be in close range with an enemy target before striking. Lurkers are particularly effective against groups of concentrated Zealots. As such, Dragoons and Psi Storm are frequently necessary to supplement the Zealot.

By default, a Zealot will kill a Zergling in three hits. If the Protoss' weapon upgrades are ahead of the Zerg's carapace upgrade, this is reduced to two attacks. Similarly, an upgraded Zealot will kill a Hydralisk in five hits instead of six hits.

Zealots are very effective when Zealots and Zergling fight en masse. Three Zerglings can counter one Zealot, but this ratio (more Zerglings per Zealot) is increased significantly with an increasing number of Zealots. This is because Zerglings attack simultaneously after surrounding the Zealot, so when more Zealots are present, they can fight side by side, thus reducing the amount of Zerglings that can surround or come into contact each Zealot at once; a good flank of Zerglings, however, can influences the battle greatly.

In 2v2 team play, sometimes a Protoss will use three zealots to block a Zerg's ramp and to contain the Zerg in. This prevents the Zerg from expanding wildly, as well as to cut off the Zerg from aiding in the attack of its ally/allies.

In most PvT match-ups, the Protoss player will opt for a quick tech play towards Dragoons, supplemented by Reavers and other advanced units. A few Zealots may come into play in the very early game in rushing/harassing the Terran if it attempts to expand quickly at its natural base, but the Protoss player will typically cease Zealots production temporarily as Dragoons are massed during the mid-game, as explained below. Sometimes, a Protoss will alternatively go for the Spirit Protoss strategy, involving multiple waves or all-ins of mass Zealot forces.

Zealots are highly effective against Siege Tanks, which have a minimum attack range in Siege Mode. As such, the Zealot speed upgrade is vital. Once a Zealot is in melee range to attack a Siege Tank, the tank cannot fight back or move without unsieging into Tank Mode. Nearby tanks that attack the Zealots will also damage allied tanks with their splash damage. Additionally, Zealots take 50% damage from the Siege Tank's explosive attacks. Zealot Bombing with Shuttles is another method of exploiting these advantages.

Zealots are much less effective against Vultures. The Vulture's concussive attack deals full damage to Zealots, while its superior attack range and speed allow for more effective micromanagement. Spider Mines, however, do 50% damage against Zealots because they are explosive. In addition, Zealots with the Leg Enhancements upgrade can run past and activate multiple Spider Mines, leading to the practice of Mine Dragging. In this technique, Zealots will be sacrificed to quickly activate a field of Mines, preferably leading them into opponent units along the way.

Zealots are generally effective against Marines due to the Zealots' strong attack and the Marines' weak health. Firebats, on the other hand, are quite effective against groups of Zealots due to their splash of concussive attack, particularly with Medics and the Stim Pack upgrade.

Zealot usage against Protoss opponents varies: sometimes, the early game is all about matching Zealot production with the opponent in hope of gaining a slight advantage. In other cases, such as 1 Gate Core build orders, only a few Zealots are produced early on, with more being added when the Leg Enhancements upgrade is complete and Zealots can be mixed with Dragoons to create an effective army of both close-up and ranged attacks.

In Zealot versus Zealot battles, to increase the effectiveness of these units with micromanagement, heavily damaged Zealots are often temporarily removed from the front line to draw enemy fire to other Zealots with more health.