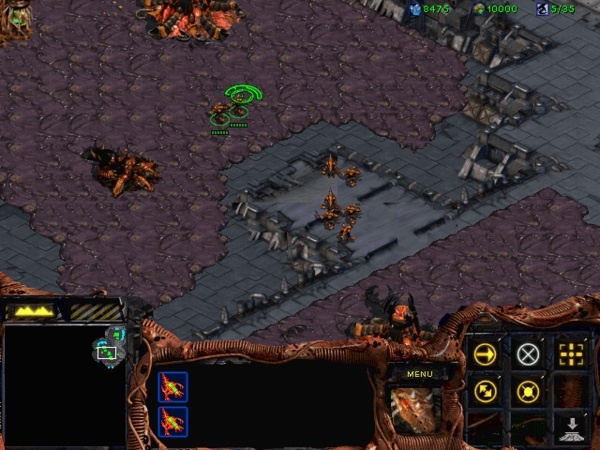 There are only very little general rules which hold true for Zerg Economic Mangement. Most times things like Drone saturation[1] (number of Drones per Mineral patch) depend on the number of expansions, the match up and the general game flow. This makes Zerg Economic Management drastically different from Protoss or Terran macroeconomics.

Larva Management and Number of Hatcheries[edit]

Unlike the other races, Zerg has to spawn workers and fighters from the same resource: Larva. Therefore it is essential that the player carefully plan the use of his production capacities (i.e. the number of Larvae available at any given time). The number of Hatcheries the player has at his or her disposal and the Larvae that spawn from them therefore become the defining feature of most build orders.

The use of Larva rather than production buildings results in a uniquely flexible economy. While Protoss or Terran players will generally produces worker and combat units simultaneously for the whole early to mid-game, Zerg players are able to focus entirely on one or the other. The main use of this flexibility is to produce as many Drones as possible for as long as possible, then at the last moment produce the bare minimum number of combat units required to hold off the opponent's attacks.

Each Hatchery can have up to three Larva at a time. Saving them up to produce one large production round is a very common technique. The most obvious use is storing three Larva for the moment when your Spire completes, allowing you to build a large number of Mutalisks instantly. This is an integral part of most Spire builds. This technique can of course also be applied to any other unit as well.

Mutalisk Micro usually involves a combination of A) stacking Mutas and B) using move-shot to keep them moving while shooting and to increase their effective range. This does not interfere with any league rules; as rules against stacking apply only to ground units. For further discussion, see Mutalisk Harassment.

The technique is the positioning of melee units around and amongst the opponent's units. This is essential when using Zerglings against Marines or Dragoons. The two main effects are:

The most commonly used example of this is Zerglings against Marines. Instead of simply attack moving into a group of Marines, it is much better to use the move command to run amongst them first before allowing them to attack. However, this is also used in ZvZ, in Zergling vs Zergling battles when one player has Speed and the other player does not. Consequently, when one Zerg player does not have Speed or is at a disadvantage, he can wall his ramp with Zerglings, preemptively surrounding the attacking Zerglings, as shown in this screen shot.

Backstabbing (not to be confused with betraying one's ally during a match up involving more than two players such as 2v2) involves waiting for the main enemy army to move out of the main base, then quickly attacking the enemy's undefended or lightly defended main base. Zerg is the most effective at backstabbing because of the high speed and damage per second of its units, particularly the Zergling. Once the Zerg player's units enter the opponent's base, he or she must quickly determine how to do the most damage before the main army returns. The best targets are usually the workers, which are essential to the enemy's economy, or the tech buildings, which are essential to the strategy of the enemy.

Backstabbing requires a careful assessment of the situation, because the Zerg must use the units that would protect his natural from the oncoming army to backstab the enemy. If insufficient defenses are left at the natural, and/or the backstab fails to do damage, the attack can backfire.

The Zerg match-up guides provide in-depth explanations of each of the three match-ups as well as offer timing information on the strengths and weaknesses of different play styles. For each race, a match-up guide and a timing article exist. See:

Against Terran, you usually cannot afford the luxury of five Hatcheries. Still you have more aggressive openings such as 5 Pool, 9 Pool, and more economic as 12 Hatch and 12 Pool. Once you reach Lair, you will either be using 3 Hatch Muta, the slightly faster 2 Hatch Muta or 3 Hatch Lurker. In some situations, you might even use Hydra/Lurker during mid-game.

This match-up is considered a rock-paper-scissors match between all very low economy builds. You can cheese with a 5 Pool (vs. Zerg), but more stable build orders are 9 Pool, Overpool, 12 Pool, and 12 Hatch. More specific build orders are the Mutalisk tech builds 11 Gas 10 Pool, 9 Pool Speed into 1 Hatch Spire, 9 Hatch, 9 Gas, 10 Pool, and 9 Gas, 9 Pool.

For each match-up, mastering some micromanagement techniques and learning basic moves of adaptation is vital. As Zerg, your essentials consist in knowing Hold Lurker, Mutalisk Harass, Mutabombing and Scourge Cloning. Although by no means an advanced maneuver, the Larva Trick is a good technique to have in your Zerg skillset.

Avoiding damage from Psionic Storm, called Storm Dodging is essential to surviving the ZvP mid-game. Against a Protoss who goes for a fast expansion, a Zergling Run-by can be very advantageous. The German player Mondragon, for example, went 47-1 during the TSL ladder using this strategy.

The essential techniques mentioned above are needed in this match-up.

This match-up tends to rely heavily on Mutalisk micro. In addition to the standard techniques, the Mutalisk vs. Scourge Control page discusses methods for fighting Scourge.