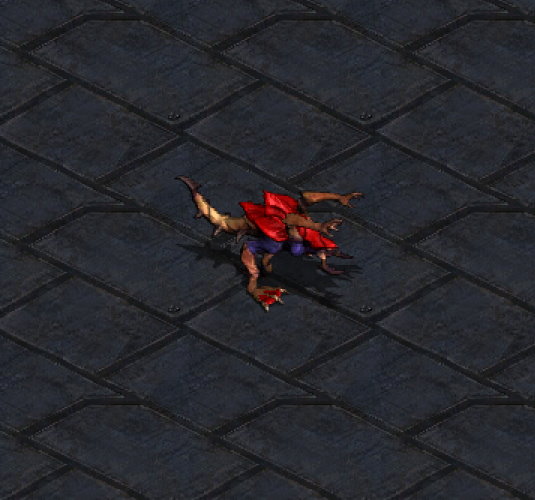 The Zergling is the earliest attack unit the Zerg player can access. Zerglings can be morphed after the construction of a Spawning Pool. They are melee units with low health individually but incredible damage for the cost. They spawn in pairs from a single Larva at the same cost and supply as a Marine but for two units.

Two upgrades vastly augment Zerglings. With the Metabolic Boost upgrade at the Spawning Pool, they have one of the fastest movement speeds, second only to Vultures with the Ion Thruster upgrade. Adrenal Glands, available at the Spawning Pool with Hive-tech, considerably improves their attack speed. Zerglings can be further upgraded at the Evolution Chamber to improve both attack and armor.

Metabolic Boost, or Zergling Speed, increases the Zergling movement speed, which allows them to act as harassment units and overall increases their utility in an army. Zerglings with this upgrade are commonly called Speedlings.

Adrenal Glands, which requires Hive-tech and is an essential upgrade to most late-game Zerg Strategies, increases the attack speed of Zerglings. Zerglings with this upgrade are commonly called Cracklings (or sometimes Adrenalings.)

Zerglings are quite powerful in the early game, especially when they have the speed upgrade, as they can choose their fights and engage any ground unit, though they are hampered by their low health. They become less useful in the midgame against ranged units that can kill them off while they close the distance. Nonetheless, Zerglings are still built in many strategies to either absorb damage or flank and make surrounding attacks.

The Melee Weapons +1 upgrade is extremely powerful since Zerglings make so many small attacks, although it can be likewise negated by enemy armor upgrades.

The Adrenal Glands upgrade, combined with Melee Weapons upgrades, makes them very powerful in the late game due to their great damage output, even though they have quite low HP for a late-game unit. These upgrades allow a small pack of Zerglings to dispatch enemy buildings quickly.

Since they are usually spawned en masse, and the loss of a few Zerglings is not vital to non-mirror strategies, they will often be burrowed around the map to provide reconnaissance.

In Zerg mirror matchups, the early game will frequently feature some Zergling exchanges. The Zerg player must actively scout to ensure an adequate number of Zerglings are morphed to counter those produced by the opponent. A small advantage or disadvantage in the number of Zerglings can decide the game at this point, so players will often try to have at least as many Zerglings as their opponent.

Only the Zergling speed upgrade is researched in most ZvZ matchups since most games do not last beyond Lair-tech.

Zerglings are an important unit against Terran, and they are used in all stages of the game. They are weak and easily killed by themselves against Terran speed and range, but when paired up with higher-tech units like Lurkers, Mutalisks, and Ultralisks, they become an indispensable component of the Zerg army.

In the early game, Zerglings are used to kill scouting SCVs and vulnerable Marines, as well as to scout. Sufficient numbers of Zerglings may make the enemy retreat as it builds defensive Bunkers or Wall in. Zerglings can also be used for all-in rushes, such as 3 Hatch Zergling.

In the midgame, Zerglings are used against Missile Turrets or to reduce Marine numbers ahead of an inbound Mutalisk Harass. As an alternative, in conjunction with Mutalisks, Zerglings are used to make a large Mutaling army to kill or block the Terran's midgame push. Sometimes, Zerglings are grouped with Lurkers and used to surround (and damage) the Terran army and prevent the Marines from spreading apart to dodge Lurker spines.

In the late game, Zerglings become the primary attackers because of the Adrenal Glands upgrade, and their usefulness is further increased when paired with the Defiler. Generally, a mass late-game Terran infantry army's high firepower will slaughter almost all Zerglings approaching it. Still, under a Dark Swarm, Zerglings can safely approach and deal their upgraded melee damage. When Plague is cast on the Terran army, Zerglings can rip it apart with their large numbers and high maneuverability. The final evolution of the Zerg army incorporates Ultralisks with Zerglings (and possibly Defilers.) In this combo, the damage output of Zerglings is increased as the Ultralisks draw fire from the Terran infantry.

When fighting Protoss, most Zerg will morph four to six Zerglings in the early game to do harass the scouting Probe and, depending on the Protoss' build, to force Cannons at the expansion if the Protoss fast expanded. Otherwise, if a Protoss uses a 2 Gate Zealot or some rush strategy, Zerglings are used to defend the expansion base until Sunken Colonies are finished, and possibly later.

Against a Protoss FE build, it's common to research Zergling Speed upgrade to deny Probe scouting totally and possibly go for an all-in Zergling attack. Earlier Zerglings (Overpool/9 Pool) means that a FE Protoss has to invest in defense earlier, slowing down the Protoss player's tech, while more economically oriented builds (12 Pool, 12 Hatch and all the variations after it) have delayed Zerglings, but give you a stronger economy.

In the midgame, the Protoss will generally have an advantage in upgrades over the Zerg player. The Zerg player is generally one down in the Carapace upgrade vs. the Protoss Attack upgrade, which means that Zealots can kill Zerglings in two hits rather than three. Therefore, Zerglings are rarely seen midgame and are usually replaced by Hydralisks and Lurkers.

Oftentimes Zerglings are sent to scout for expansions (and take them down before the Cannons warp in) and Protoss army movement.

Zerglings are usually paired midgame with Lurkers, as in the 5 hatch Lurker/Ling midgame strategy, to repel Zealots and Dragoons from the Lurkers.

The Sauron Zerg style also incorporates large numbers of dual-upgraded Zerglings and Hydralisks. However, it is generally weak against modern Protoss builds unless an early-game advantage is gained.

As a counter to Corsair/Reaver or Corsair/Dark Templar build orders Burrow is researched, and Zerglings are burrowed all around the map. This essentially provides the Zerg player map vision of key locations and enables the Zerg to keep track of any Protoss movement.

In the late game, Zerglings will usually have Adrenal Glands researched, which gives them a significantly higher damage output. Additionally, if they are paired with Ultralisks and possibly with Dark Swarm for support, they have a higher survivability chance. Thus, they can deal a lot of damage in a short time.

A small group of Cracklings (and Dark Swarm) can destroy an expansion or Gateway in seconds, so late-game Zergling attacks or drops (respectively) are very viable for decimating such bases. It is also very common to draw the Protoss army to one side of the map and send a group of Zerglings to take down an expansion on the opposite side.