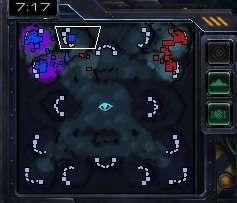 The goal of this build is to hit a Gateway/Stargate timing-attack that aims to kill the Zerg player's third base while you are taking your own. The build attempts to prevent the Zerg player from droning too heavily in the early-game whilst also attempting to slow down their Tech (or to force them down non-threatening Tech paths). Ultimately, the aim is to keep the Zerg player on the defensive while building a strong economy.

This build allows for any transition heading into the mid and late-game phases. The most common transition is into a Blink Stalker/Colossus(and eventually Mothership) composition, but anything from mass Blink Stalker to "Sky Toss" is possible. 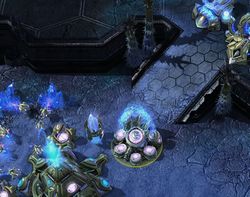 The goal of the +1 4 Gate Stargate is to allow for a strong economy while forcing the Zerg player to waste some of their early Larva on units to defend their bases, thereby slowing down their economy. The Tech obtained in this build is reached at a timing that will prevent the Zerg player from being able to accomplish damage that will justify their production. For example, flooding Roaches from 2/3 bases will be met by Void Rays and Cannons, whereas 2 base Mutalisk aggression will be met by Blink Stalkers and Cannons.

This build opens with a YufFE. Depending on scouting, the player will choose between Variants A, B and C.

If you see your opponent is going for a fast third base then you instantly know several key things. Firstly, the opponent's gas (required for Metabolic Boost, Roaches and Lair) will be delayed. Secondly, they will be droning as hard as they can in order to take full advantage of their quick third base. This means that, due to the delayed Roach timing, your 4 gate +1 Zealot push will be able to hit before the opponent has enough Roaches and Speedlings to properly defend, giving you a strong timing window in which to deal damage. 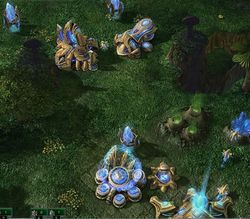 The plan is to first clear out your third base (he will not have burrow yet) of any enemy Zerglings with a Zealot whilst sending the rest of your Zealots to attack the opponent's third base. Place down a Nexus at your third base, and fortify it with cannons if necessary. Help wall off your third base with extra Gateways. While doing this, place a proxy Pylon as close to their third base as you safely can. Warp-in your first round of 4 Zealots and then take the Assimilators at your natural expansion. Place down a Twilight Council. As soon as it finishes, send your first Void Ray to join in the attack. Once the attack ends use it to hunt Overlords around the map.

Here is a step-by-step build order for executing this timing-attack after opening with a standard YufFE:

If the attack does manage to kill off the third base the Protoss player will be far in the lead. A careful defence of a likely all-in is required. In general, 7 to 9 Gateways with Blink and +2 Ground Weapons will be enough to handle more basic/low-Tech allins with good micro. After these have been started, a Robotics Bay followed by a Colossus Den is advised to avoid losing to a 2 base build-up of Roach or Roach Hydralisk and to detect Tunneling Claw Roaches.

If the attack does not manage to kill off the third base the game is up in the air depending on how much Larva was wasted and which units were killed. In general, a cannon defence coupled with Blink Stalker and +2 Zealots will be enough to stall for Colossi, at which point Protoss can continue to push and head into the late game on strong economy and Tech.

If your opponent is going for fast Mutalisks then the key indicators will be:

When you see this happening, you should immediately abandon any plans to pressure the opponent. Instead, immediately take your third base and put down a Twilight Council. While doing this, start placing cannons in your mineral lines. Due to your delayed Stalkers you may need to get up to 3 cannons per mineral line in order to be safe.

Barring any major mishaps(i.e. Forgetting to cannon mineral lines, allowing ling runbys), this build performs very well vs 2 base Mutalisks. The main struggle in normal PvMutalisks is getting a 3rd base, but that is already taken care of.

It is important to warp in a mix of Stalkers and Zealots while Teching to Templar Archives. As suggested by the PvMutalisk guide, Sentries should be avoided in favour of using the gas for Tech and High Templar. 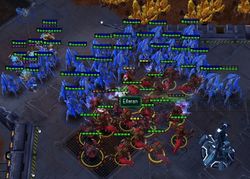 Outcome of biding your time.

The 2 base Roach Hydralisk attack is an all-in vs. this build. If they fail to kill or do serious damage the economic situation will be unsalvageable. Additionally, the longer the attack goes on the better the situation becomes for the Protoss player(due to continuously higher income, increasing Tech and increasing production). As such, the main threat from the Zerg player will come in the initial attack wave. There is not enough time for the Protoss player to Tech up to Colossi and get 2 out onto the field with range in time to defend this attack. As such, alternative defences are required. A chronoboosted Blink upgrade and constant warp-ins from your Gateways will provide you with the means to defend this attack. This defence will require good positioning, micro and sharp macro.

In particular, it is highly advised to put a Pylon as close to the place where the attack will happen as possible. For example, on Antiga Shipyard a Pylon near the abyss in the area connecting the Third and Natural will allow reinforcements without being exposed. Without these immediate reinforcements the attack could easily tip the other way.

Here is a step-by-step build order for this defence after opening with a standard YufFE:

This is the hardest of all attacks to hold and is generally a close battle either way. After using most of your minerals for the Gateways and defences at your third your excess gas is ideal for Sentries. Splitting up the opposing army to be cut down by Zealots and sectioned off to avoid facing the whole army at once is a good idea. Alternatively, force fielding a ramp may allow a delay to bolster the defences in the area.

An easy way to remember the general build order is this: 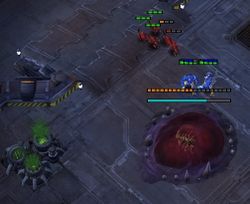 This build does not depend heavily upon scouting as the aggression utilised within this build should force the Zerg player into certain Tech and timing avenues (analogous to MarineKing's Aggro-Style in TvZCite error: Invalid <ref> tag; invalid names, e.g. too many). However, as with any build, unscouted all-ins(particularly 1 base allins) can still pose a threat.

The most important pieces of scouting information are finding/verifying expansions and discerning the choice of Lair Tech from the Zerg player.

As described by the opening, a probe should be sent to scout for the Zerg's location after the Nexus is placed down. 10 Pool Speedling All-in is particularly scary, and requires immediate reaction(either walling the natural with a cannon or retreating to the main). A 1 Base Baneling All-in is even scarier, and requires a complete probe cut, hastily constructed wall with 2 cannons, fully chronoboosted Zealot production and a probe pull.

Also important is the gas timing. If the Zerg has no gas they are going for 3 Hatch Before Gas. If the Zerg mines only 100 gas(which can be determined by clicking on the gas and seeing how much remains) they are planning to defend 3 bases with relatively early speedlings.

If the Zerg mines over 100 gas there are many options available, depending on whether they have a third or not. If they do have a third they will likely be doing Ling/Baneling to defend the midgame timing attack, planning to control the map with midgame Roaches, or they will be trying to Tech up relatively quickly. The Roaches will be shooed away by the Void Ray. The Tech will be too late to be helpful for the timing attack, but could prove to be a problem further on in the game, particularly when trying to establish the third. If they do not have a third they will likely be doing either 2 Base Mutalisks or 2 Base Hydralisk All-in, both of which are covered in the Variant section.

For more detailed information on scouting with the opening, see: Gate_Nexus_YufFE#Scouting.

For more detailed information on the execution of the opening, see: Gate_Nexus_YufFE#Execution.

This build is strong on almost every map that a YufFE is viable on. However, medium-length rush distances are favourable and an easily defended third is a large bonus.

Only maps where the YufFE is hard to execute.

The following are replays from Yuffie's PvZ ladder games. Each opponent is High Masters/GrandMasters EU.

The following are replays from my(WarSame) ladder games. Each opponent is in Low Masters. Alternative replays are very welcome.