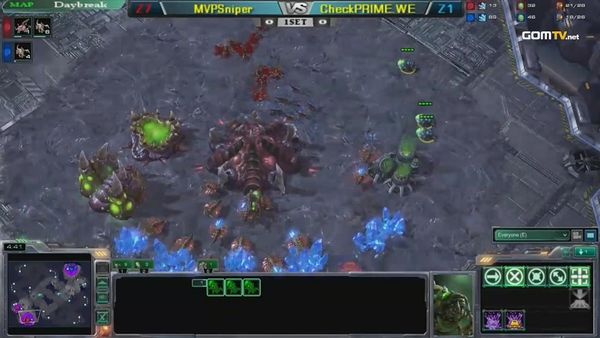 This build goes straight for an Early Bust, attempting to break the opposing Zerg with Banelings units if the Roach Warren was too delayed to defend early aggression.

The goal is to end the game with the initial Zergling/Baneling push by dealing crippling damage to the opponent's Drone count.

Gas timings are also very important. Pay attention to your gas count so you can be precise in taking your Drones off gas. You can choose to leave 2 on gas for longer (pulling off at 90

) depending on what follow-up you may intend if the game doesn't end, but generally just gather what you need for the attack and enough for a couple of defensive Banelings in the worst case scenario. This way you have enough minerals for a Queen as well once the 18 Overlord hatches. Again, this is merely follow-up advice because, if well executed, you should deal crippling damage to your opponent.

Attack with the initial six Zerglings and retreat once the opposing player hatches opposing lings, and engage close enough to the opposing base to keep them contained until Baneling finish morphing, keep exchange Zerglings if you have more of them.

When morphing Banelings, always morph them in pairs. Against a conservative hatch first opening, the opponent's Spawning Pool will be very near completion as your Zerglings enter your opponent's base.

12 Pool Speed, Baneling Rush If your opponent opts for a pool earlier than 10, you are at an advantage, and upon scouting equal or earlier Zerglings than yours, you can choose whether to continue with or abandon the build. If you choose to abandon the build, you should aim to produce two Queens immediately to block your ramp or use defensive Banelings to secure your Natural Expansion.