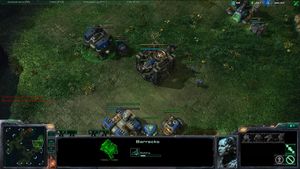 An opening with 1 Barracks, Factory and Starport started before spending Vespene Gas on anything else. Previously, the standard build for fast Banshee-openings or Hellions (with a Medivac)-drop for harassment openings, but can also serve for only a fast Viking for Overlord-harass in TvZ or anti-Banshee opening in TvT to go Reactor-Hellion opening safely.

Generally this build comes off a 1 Rax FE build and followed by Refineries (1 & 2) or off a Refinery First build; depending on the timing of the opponent's tech.

Whereas the Factory can be used for Siege Tanks or Hellions for early splash damage against the smaller army sizes, this build gives the quickest access to Starport units, namely Medivacs and Banshees. These allow direct access to the opponent's base, where you can aim for damaging the army size or the worker count, and delay the opponent's build to buy time.

With a lot of Tech available 1/1/1 adapts fairly well to anything you might scout your opponent doing. Except for fast expansion builds that go unpunished, 1/1/1 delays an expansion for safety, delaying additional buildings and army to match the opponent's expansion timing is recommended.