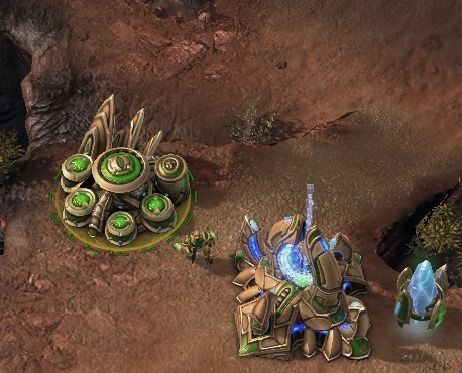 This opening is the Protoss opening of choice in most builds, since the Cybernetics Core is the key building for any kind of Protoss tech or units aside from Zealots or Photon Cannons. It is safe against most openings from all three races, however it does not allow for very early aggression.

The goal of this opening is to build a Cybernetics Core as soon as possible, which allows for Stalker and Sentry production, the essential Warp Gate research as well as further teching.

This Zealot is typically produced at a time such that it is completed by the time the Cybernetics Core finishes warping in.

This build has a lot of variants, all of which depend on your specific goal. A 9 Pylon 13 Gateway (above) focuses on Probe production, while building the Gateway on 12 is a little faster while only requiring a brief pause in Probe production. A 10 Pylon 10 Gateway allows for a little early pressure and earlier tech, at the expense of Probe production.

It is generally a bad idea to wall off versus a Terran opponent. A frontal wall provides little defensive benefit against the Terran's ranged units and exposes your front buildings to possible attack. Against Terran it is typical to build a Stalker as your first or second unit to deal with any possible Reaper harassment, kill any scouting SCV, and/or scout.

Walling off against Protoss can be an advantage when faced with a few specific builds (4 Warpgate Rush or similar aggressive builds), but can be a liability if your Protoss opponent can use Stalkers to destroy it at range. The first unit to be trained out of the Gateway typically a Zealot, followed by a Stalker.

The Protoss player should almost always wall off the top of his ramp with his Gateway and Cybernetics Core, leaving an opening large enough for a single unit to pass through. This allows a single Zealot (commanded to hold position) placed in that opening to effectively complete the wall, preventing a Zergling from running past. The Zealot should be followed up with either a Stalker or a Sentry.

This build can be used as an opening to most Protoss builds. See Protoss Strategy for follow ups. Some examples are: