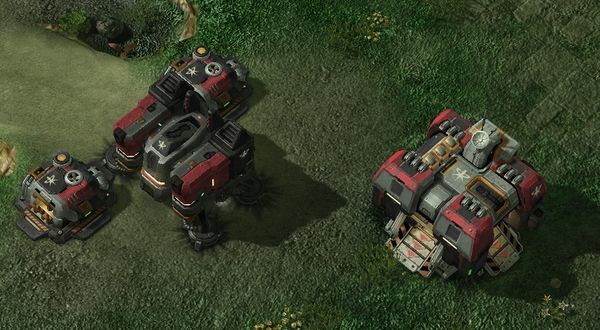 A Depot-Rax-Depot wall with your Factory safely behind it.
Strategy Information
Matchups:
TvX
Type:
Opening

An early Factory (1) build that completes one or two Add-Ons for early Hellion and Siege Tank harass/pressure. It should be noted that any research, besides Siege Tech, is delayed in favor of army size and a good timing on Command Center (2). This comes in two varieties.

Reactor pressure, mass-producing Marines or Hellions and then switching the Reactor to the Factory regardless for Hellions to quickly reinforce the push, this can be combined with a Medivac for a two-prolonged attack that is strong against a fast expand build in general, but does not fare so well against a modest opposing army size but is great for doing economic damage.

Tech Lab opening are for early research (e.g. Stimpack, Siege Tech, etc.) or brief production of more expensive units like Marauders or Siege Tanks, with Marines or Hellions to support and take damage. This means research timed-aggression or using the high damage of Marauders and Siege Tanks versus Armored targets for more army damage and may be a building or two if played well.

Factory (1) and Reactor/Tech Lab (1) for building an early army to pressure the opposing army and economic early with Hellions and Siege Tanks or Marine and Marauder and any mixture of the four, but each has timing windows for aggression for each match-up and would be complex to learn them all.

Upon scouting, figure out what macro decisions your opponent has made or is making (Econ, Tech, Army) and adapt your build accordingly.

This opening can be used to transition into a wide variety of mid-game army composites. The following builds also start out with this opening: