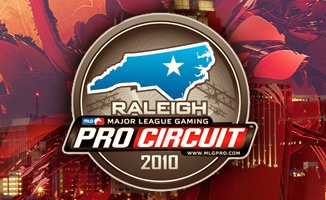 MLG, a well known brand amongst console gamers worldwide, has decided to add StarCraft II to its pro circuit. With part signed up players will compete with a selection of invited pro-players for over $7000 in cash.

Founded in 2002, Major League Gaming is the largest professional video game league in the world.[1] During the beta-phase of StarCraft II MLG ran the MLG SC2 KotBH which can be seen as a hint that StarCraft II would be added to the Pro Circuit after launch. And on the 31st of July the official announcement came on TeamLiquid and MLGPro.com. Starting with MLG Raleigh StarCraft II would be included into the 2010 MLG Pro Circuit.

The tournament was originally planning to be 32 sign ups only but after a combination off complaints that it would be featuring "the fastest sign-uppers in America" and seeing the demand the tournament generated, MLG extended this to 64 players, with some players invited.

The event will be casted by Day[9], JP McDaniel, Husky and HDStarcraft.[2]

Offering $7,000 spread among players as follows: