The PokerStrategy TeamLiquid StarLeague 3, the first TSL event held for StarCraft II, was an international open tournament that took place from March through May 2011, offering a US$34,500 prize pool. It continued the tradition established by the 2008 Razer TSL and the 2009 Pokerstrategy.com TSL, with Korean progamers participating for the first time. Thirty-two players gained eligibility to compete through earning seeds from the TSL2, receiving invitations, winning one of eight qualification events starting in January 2011, or ranking highly in points earned from qualification events. The single-elimination five-round tournament was played beginning in March 2011, with each match a best-of-3, -5, or -7 series. Results were revealed each weekend as pairs of casters commentated over a live stream, usually from replays. The exception was the finals, which were played live at TL.net's headquarters in New York City on May 15, 2011, where ThorZaIN defeated NaNiwa to take the US$15,000 first-place prize.

TL.net, the biggest foreign website-slash-community dedicated to StarCraft, has grown steadily since its founding in 2002. With its increase in both members and staff as well as prestige and acclaim, the site organised numerous events, such as small tournaments and exhibition matches over the years.

In 2008, the biggest foreign StarCraft: Brood War tournament thus far was held: the Razer TeamLiquid StarLeague, which was won by IefNaij. One year later, an even bigger sequel saw the light of day: the Pokerstrategy.com TeamLiquid Starleague. It was won by Liquid`Tyler. Mondragon and Sen came in 2nd and 3rd respectively.

With the release of StarCraft II, TeamLiquid's events have centered around this second iteration. After a number of Team Liquid SC2 Opens, the site finally announced the Pokerstrategy.com TSL3 on the first day of 2011.

On the 31st of December 2010, a countdown clock appeared below the banner of TL.net. People began to speculate what would happen at Midnight EST as the timer reached zero. Some dismissed it as a simple New Year's Countdown, but many began speculating as just to what it might be.

As midnight struck, a hype video appeared on TeamLiquid and the TSL3 was announced to the public. Set to be the largest online tournament for SC2, the tournament will be broadcast live around the world and feature players from every major StarCraft region, fighting for a piece of the US$34,500 prize pool. With qualifications for European servers and US Servers alongside invites for those on Chinese and Korean servers, the TSL3 is set to reach one lofty peak that it did not achieve with the previous TSL events: the introduction of Korean progamers.

The tournament started in March and ran for nine weeks. The Qualifiers began on the 8th of January.

There are 32 spots available for the Pokerstrategy.com TSL3 and they're allocated as follows:

The main tournament format was a 32 player single-elimination bracket. Each player thumbs down one map in each round before the Semifinals, with maps being picked and ordered randomly following the thumbs down procedure.

PokerStrategy.com is a poker school and community. It's a place where you can learn poker from the very basics to advanced levels. They have active forums in 18 different languages, and they offer the chance to aspiring Poker players to learn from a beginner to a professional level.

A few words from the sponsor[edit]

An interesting year has passed since we sponsored the last TeamLiquid StarLeague. StarCraft II was released, hundreds of thousands of new StarCraft fans emerged and TL.net went through a phase of incredible growth and development. That’s why we are proud to be back and support the new tournament.

We see TeamLiquid and StarCraft as what we want to be for poker: the world’s best place to learn the game and talk about it. StarCraft is a beautiful game of strategy – and large events such as the TeamLiquid StarLeague help it being recognized beyond the core fan base.

Players who complete the PokerStrategy Quiz, get a chance to enter the TSL3 raffle and win a trip for two people to visit South Korea for a GSL Finals and a tour of the oGs-Liquid house. 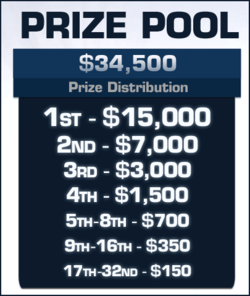 The TSL3 prize pool in all its beautiful Graphics Glory

A total of US$34,500 was rewarded to the players. Seeds into the TSL4 were also awarded to the top three finishers.

Each player will be allowed to thumbs down one map in best-of-three and best-of-five series. Maps will be randomly chosen and ordered of those remaining.

The maps have been modified to hide results and build orders in the match history section to avoid spoilers.