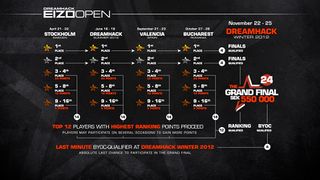 Qualification is determined in order: Direct seed, Points, Matchscore, Mapscore. Walk overs count for the player in the match and map scores, never against. First group stage in Stockholm counted four player groups so one to two walk overs for the players there.