The GSL Blizzard Cup is a tournament organized by GOMTV, which plans to look back at and to conclude the year 2012.[1] 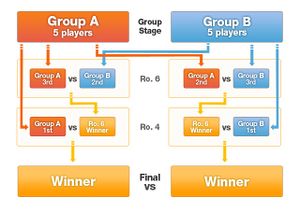 The 2012 GSL Tour Awards will be given in the following categories:

* As PartinG won both the 2012 Battle.net World Championship and the World Cyber Games 2012, Seed as the next highest, non-qualified, player in the GSL Point Ranking takes his second spot.[2]

Heart of the Swarm Invitational[edit]