The 2012 MLG Pro Circuit Spring Championship was the final event of the 2012 MLG Spring season. It was held at the Anaheim Convention Center in Anaheim, California.

The tournament's format was similar to previous MLG Pro Circuit events with two preliminary stages - a round-robin Group Stage for the highest seeded players and a double-elimination Open Bracket. They are conjoined in a culminating double-elimination Championship Bracket. For more details see the Format section.

In addition to the regular tournament, there was also a side exhibition tournament featuring KeSPA Players as part of the new partnership between Major League Gaming and KeSPA.[1] MLG also hosted the WCS USA National Finals.

Panoramic view of the crowd during the grand final 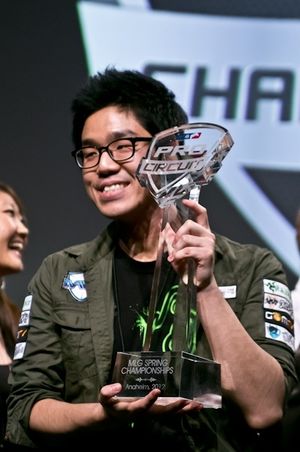 Champion DongRaeGu holding up his trophy

* Ryung and Socke beat Bly and Tefel in the consolation match for the 11th & 12th seeds granted in Spring Arena 2.