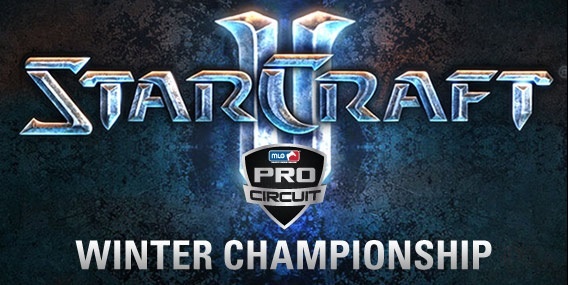 The 2012 MLG Pro Circuit Winter Championship is the final event of the 2012 MLG Winter season. It will be broadcast by Tasteless, Artosis, djWHEAT, Day(9), Tumba, Adebisi, Rob Simpson, itmeJP, Robin, Kibblez, Psylence, and Axel.[2] Furthermore, this championship will be the first MLG StarCraft II event to feature an official stream in a foreign language, as Pomf et Thud will broadcast it in French.[3] The tournament's format is similar to previous MLG Pro Circuit events with two preliminary stages - a round-robin Group Stage for the highest seeded players and a double-elimination Open Bracket. They are conjoined in a culminating double-elimination Championship Bracket. For more details see the Format section.

* NesTea and Leenock had to cancel, HayprO and SaSe were the next two seeds determined in the 2012 MLG Winter Arena, and thus will be seeded into Group Play.[4]

** San, Mvp, LosirA, Pomi, merz and SjoW forfeited their seeds for various reasons and will not play in the tournament.

Ties will be broken using the following Tiebreakers in this order:

Ties between more than two players will progress until one can be separated, then restart from head-to-head.