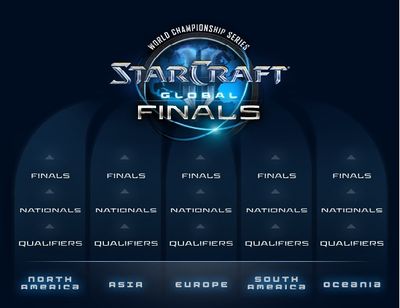 The StarCraft II World Championship Series is a series of events organised by or in cooperation with Blizzard Entertainment. Its goal is to identify a true global champion, as players enter and qualify through open tournaments starting at the national level. The circuit will culminate in the 2012 Battle.net World Championship, a live event which will be held instead of a 2012 BlizzCon Invitational.[1] This World Championship will be the final event of a four-tier program, with tournaments at the continental, national, and sub-national level throughout 2012:

The National Championships are designed to appoint national representatives, who will earn spots at their continental Finals events, which will be an all-out brawl between neighboring countries to decide who will represent their continent at the Battle.net World Championship. Each tier feeds directly into the one above it, with 32 players competing in the World Championship. The whole program will be held exclusively on Wings of Liberty, regardless of possible Heart of the Swarm release.[2][3] In April, a list of 28 countries which would receive seeds to the five continental finals was announced.[4] In addition, two events were held for players from other countries. One for Southeast Asia and one for other European Countries, South Africa, and Israel.[5][6]

See also: 2012 StarCraft II World Championship Series/Timeline for a detailed, chronologically sorted timeline of all events in the Championship.