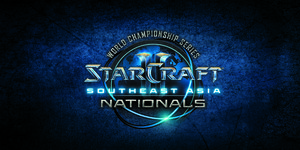 The 2012 StarCraft II World Championship Series: Southeast Asia Nationals was a StarCraft II tournament hosted by Blizzard for 4 players from South East Asia. The top two will qualify to the 2012 WCS Asia Finals.

The event was held alongside the 2012 WCS Singapore Nationals on July 29, 2012 at the Funan DigitaLife Mall in Singapore.

$1,800 and two paid trips to the 2012 WCS Asia Finals are spread among the players as seen below.

The 4 players have been determined by online qualifiers for each particular country. One player from Malaysia, one from Thailand and 2 from The Philippines qualified.