DreamHack Open: Summer was the second stop on the 2013 DreamHack Open and was played at Elmia Fair in Jönköping, Sweden from June 15 to June 17. It featured 128 players with a prize pool of 175.000 SEK and seeds to the Grand Finals in November.[1]

The event was casted by Apollo and Nathanias, hosted by iNcontroL and TaKe, and observed by Adebisi.

Seeds to the Grand Finals[edit]

The top 4 players are seeded to the Grand Finals. StarDust, SjoW and TaeJa qualified. However, as Jaedong already earned a seed in Stockholm, a consolation bracket was played. TLO earned his seed. 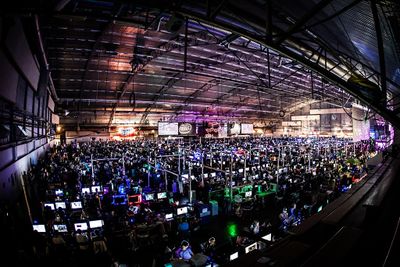 The BYOC LAN area of the DreamHack festival.

These consolation matches were played for WCS points.

This consolation bracket was played out between the losers of the quarter-finals to determine who would receive Jaedong's direct 2013 DreamHack Open: Stockholm seed.