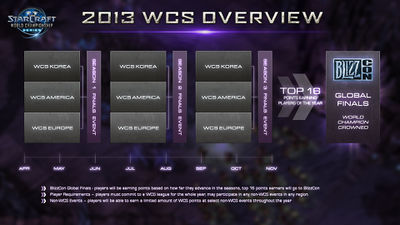 The 2013 StarCraft II World Championship Series is a series of events organised by or in cooperation with Blizzard Entertainment. They are designed to include four major StarCraft II broadcasters, ESL, MLG, OGN and GOMTV. There will be a $1.6 Million USD prize pool, that will be spread out among 13 events throughout the year. Those events are split into regions with WCS Europe, WCS America, WCS Korea, and the finals that follow them. There will be three seasons of the regional events, and at the end of each season a global seasonal event. Players will earn points throughout the seasons to qualify for the overall final at BlizzCon 2013.

Season finals contains 16 players, coming from top 5 players of each regional Premier League, and top 6 players of regional league hosting the event. Each region will host a season finals.

The initial reactions were mixed, as the information regarding the format and prizes wasn't announced until later, which resulted in growing skepticism towards the tournament.

Korean response to the prize pool[edit]

The vast majority of Korean players and team managers felt that the re-structuring of the GSL prize pool diminished the incentive for players to compete in the Korean league due to the much higher skill level and overall difficulty in qualifying for Code A[1],[2],[3],[4],[5]. This resulted in a lot of high profile players trying their luck in both Europe and North America, something most non-Koreans feared as the tournament isn't region locked.

There was a lot of controversy regarding the organizations selected as the hosts for the regions (MLG for NA and ESL for EU). Many felt that NASL and DreamHack would've been the better choices due to their track record, DreamHack putting on events that always pushes the boundaries of production value and NASL having tremendous amount of experience in holding big scale leagues with qualifiers, group stages and offline event.

Click [show] on the right to view Global Finals