The 2014 WCS Global Finals is the final event of the 2014 StarCraft II World Championship Series. Sixteen players will compete, qualifying through earning WCS points throughout 2014 at each regional WCS season and a multitude of non-WCS events. Round of 16 is played on November 1st, 2014, at ESL’s studio at Burbank, CA.[1] Round of 8 and afterwards are played at Anaheim, California at Blizzcon 2014 on November 7-8th. 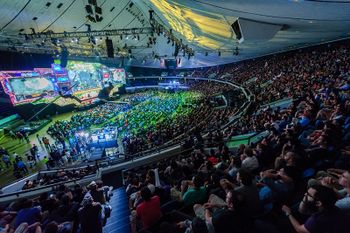 The StarCraft II stage and crowd during the final day

$250,000 USD are divided among participants as follows:

A 4-team single-elimination bracket of 2-on-2 matches was announced with the players who lost in the first round of the Global Finals.[3] The matches were played in an early build of the upcoming expansion Legacy of the Void, playable for the first time at BlizzCon, using the new Archon Mode where two players control a single force.