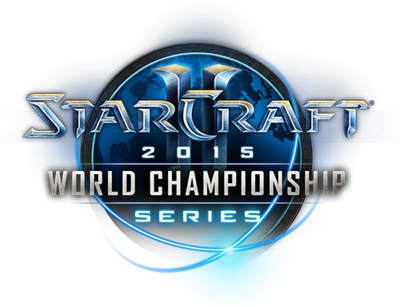 The 2015 StarCraft II World Championship Series is a series of events organized by or in cooperation with Blizzard Entertainment. They are designed to include three major StarCraft II broadcasters, ESL, GOMeXP and SPOTV Games. There will be a 1.6 Million USD prize pool, that will be spread out among multiple events throughout the year. Those events are split into regions with two in South Korea and the rest of the world reunited in a single WCS. There will be three seasons of the regional events. Players will earn points throughout the seasons to qualify for the overall final.

There are big changes in the 2015 edition, with WCS Europe and WCS America merged in a unique WCS, and the creation of a second league in Korea organized by SPOTV Games. 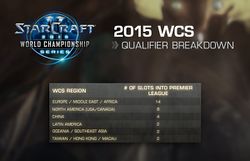 Apart for the first season, GSL remains the same in 2015

The format of the new league is still a bit vague

The StarCraft II StarLeague operated by SPOTV Games is a new league introduced in 2015 to give more opportunities to Koreans players to earn WCS points.

As for the 2013 & 2014 series, partner events will give the opportunity to players to gain WCS points outside of the league. Three tiers have been created to determine the number of WCS points given out, depending on factors like prize pool, map pool, qualifier and tournament format.

The 2015 WCS Global Finals feature the sixteen players with the most WCS points in 2015. They are played in California, conclude 2015's WCS and distribute a total of $250,000 USD in prize money among the participants.

Exception in Season 1, with no player in Code A.
The top 32 players from the qualifiers advance in Code S.

The distribution of points and money for the places 17th-28th was introduced for the Season 2.