The 2016 WCS Global Playoffs and Finals are the conclusion of the 2016 StarCraft II World Championship Series. Sixteen players (eight from WCS Korea, eight from WCS Circuit) compete for the most prestigious trophy in 2016. They qualify either by winning one of the seven tournaments providing a direct spot, or by earning WCS points throughout 2016 in multiple leagues and events. The players will first go through the Global Playoffs, a group stage. The eight remaining players will participate in the Global Finals, the culmination of the World Championship Series. 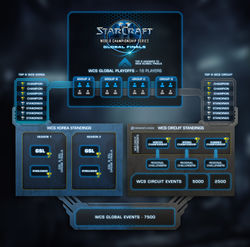 If a player has won multiple GSL/SSL events, or multiple Circuit Championships, then there will be one more seed from the standings.

1 Hydra was unable to attend the Global Playoffs due to a scheduling conflict with his wedding. This resolved the tie that existed for the final WCS Circuit qualifying spot between viOLet and Elazer.[1] The tie for the groups' seeding was broken by a coin flip on October 8, 2016[2] with viOLet gaining the 7th spot.[3]

2 Polt was unable to attend the Global Playoffs due to entering the Korean military.[4] His spot was taken by the next player in the WCS Circuit rankings, PtitDrogo.

The prize pool has been doubled compared to the previous WCS Global Finals for a total of 500,000 USD.

Data about number of viewers[6]: