The 2017 StarCraft II World Championship Series is a series of events organized by or in cooperation with Blizzard Entertainment. They are designed to include three major StarCraft II broadcasters, AfreecaTV, DreamHack and ESL. Like in 2016, there will be a 2 million USD prize pool, that will be spread out among multiple events throughout the year. WCS will be essentially split between the WCS Circuit and WCS Korea, only reunited in WCS Global Events and in the WCS Global Playoffs and Finals that conclude the season.

Sixteen spots in the WCS Global Playoffs will be available, either by winning specific events (IEM Katowice, WCS Circuit events or WCS Korea GSL seasons), or by being one of the top-ranked players of the WCS Circuit or WCS Korea.

There will be three seasons of Global StarCraft II League (GSL) awarding points.

The StarCraft II StarLeague is organized by SPOTV Games, and operates as follows:

There will be four WCS Circuit Events awarding points. These events are run by DreamHack.

Regional Challenger tournaments will seed into the events, and provide additional points.

Besides the WCS Global Playoffs and Finals, WCS Global Events will reunite players from both regions. 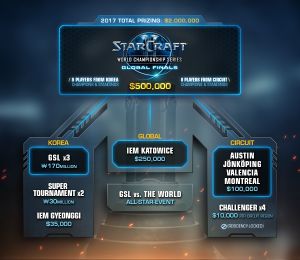 At the end of the year, sixteen players from each region qualify to the 2017 WCS Global Playoffs.

If a player has won multiple GSL seasons, or multiple Circuit Events, then there will be one more seed from the corresponding standings. There will one less seed in the region where the winner of IEM Katowice plays.

The 2017 WCS Global Finals will feature 8 players qualified from the Global Playoffs, playing in a single-elimination bracket, with Bo5 matches leading to a Bo7 grand final, crowning the 2017 WCS Champion.