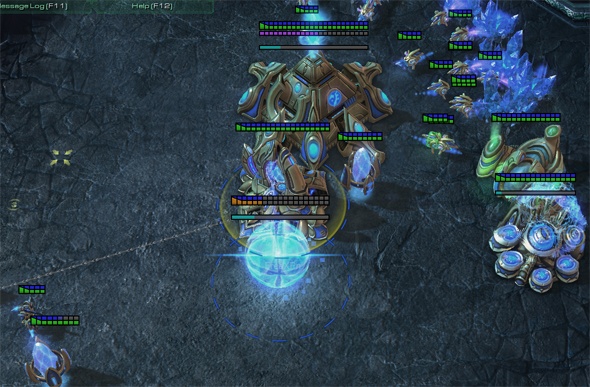 A pressure-based expansion build that is designed to give map control against a Terran player whilst safely taking an expansion. It is somewhat analogous to the Terran 2 Rax Reactor/Tech-Lab opening.

By building two early Gateways and Chrono Boosting out Warpgate Research, the Protoss player has a small, early-game window during which they are able to out-produce their Terran opponent. This gives the build great stopping power against Marauder-based pressure builds (such as the 2 Rax Reactor/Tech-Lab opening) whilst also allowing the Protoss player to put heavy pressure on any Terran fast-expand (such as a gasless expansion).

Against any early Terran pressure, this build relies purely on Protoss's ability to micro their units effectively against Marines and Marauders as an early Concussive Shells upgrade prevents the Protoss player from being able to retreat from such engagements. Against any early Terran expansion, this build relies on the Protoss player being able to force the Terran player to build additional Bunkers, forcing the Terran player to remove SCVs from mining in order to repair their Bunkers, or forcing the Terran player to lift their expansion back into their main base.

Use your scouting Probe to build a proxy Pylon near your opponent's base at 32 supply. As soon as you build the Pylon send that Probe back to your natural and use it to build a Nexus as soon as you have the money for it. After the proxy Pylon is finished, warp-in two Stalkers and make sure the rest of your units (1 Zealot, 1 Sentry and 2 Stalkers) are at the proxy Pylon by that time. Move in with your force as soon as the Stalkers have finished warping-in. It is unlikely that the Terran will have many forces at this point in time, especially if they attempted a fast-expansion.

If you can force the Terran up their ramp (or they are still up their ramp when you attack) then you can set-up a Forcefield contain using Sentries to keep them in their main base; this will prevent them from expanding until they are able to build Medivacs, which will give you a significant economic lead. If you do manage to set-up this contain, make sure to pull back to your own base by 9:00 to avoid Medivac drops dealing significant damage to your own economy/infrastructure.

Against a Terran fast-expand strategy, your forces will likely run into a Bunker. It is possible, with good control of your Stalkers and with good Forcefields, to kill a single Bunker and force the Terran to lift their Command Centre back into their main base - this will allow you to set-up a Forcefield contain as described above. However, against more than one Bunker, or if the Terran has pre-emptively pulled SCVs to repair that Bunker, you will not be able to do any damage.