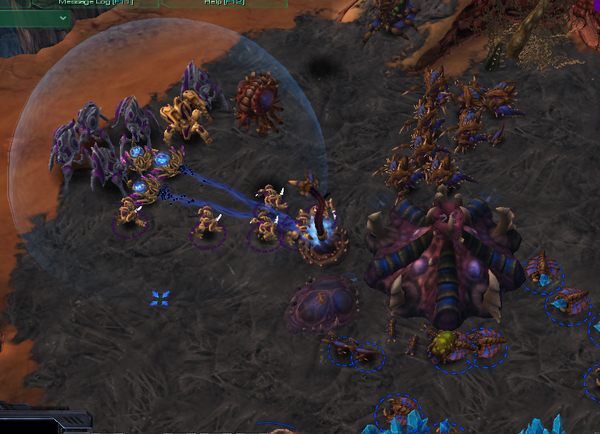 A quick tech to Hydralisk Den to stop any basic Protoss unit pressure, skipping the Roach Warren and Zergling Speed as a trade-off for the economic gain. The Hydras excel against Stalker/Sentry, and Zealot when able to kite, that an aggressive Protoss will make when preparing to attack, expecting Roaches. This build was featured on the first episode of Liquipedia TV's Strategy Hour[1]

Opening up with an Overpool, the build strives to take an economic lead against a non-rushing Protoss. Getting the Hydras out in time is crucial to stop a Protoss timing push while saving the Hatchery will put you ahead substantially.

As mentioned, use your Drone scout to confirm his initial build and the 6 Zerglings to scout his follow-up. If you start feeling unsafe with your lings, simply run them out of your opponent's base and sit them in his natural as scouts for his push. Do this as well if you cannot get the lings in at all. Also, send one of your scouting Overlords to his natural to spot his push timing. Use further Overlords to spread creep near your natural to give you a micro advantage in the battle to come.

Your main goal is to get the Hydralisks out in time to hold off the Protoss push. Make sure to practice the timing to be able to execute this build perfectly.

A key concept in following this build up is scouting for a Protoss expansion. You should have an Overlord near their choke or natural to spot for this. If not, do not be afraid to sacrifice an Overlord to get this valuable information.

If the Protoss expands you might be able to kill them off straight away, but be sure to never overextend yourself. Instead, go for a third expansion, preferably taking a nearby High Yield on maps like Blistering Sands and Shattered Temple. If you can, keep the Protoss under pressure with your Hydras, forcing them to keep making Gateway units rather than teching to Robo units. Power Drones, spread out your Overlords for creep generation and Tech up to, for example, Infestor and Broodlord. Mix in Roaches to take damage from their Gateway units as your army grows.

If the Protoss does not expand chances are a more powerful push is coming. Sit back on two bases, make sure your saturation is good and macro up. With your eco advantage you should be able to overpower their push if it comes. Keep scouting their expansion in case they do take it, but overall just make sure not to overextend yourself by engaging prematurely. Rather ride out your advantage for a solid win.

With your Hydra heavy army, be careful about engaging Colossus or Sentry-heavy armies. Be aggressive versus a Protoss going for fast Storm. Teching to High Templar leaves the Protoss with a vulnerable window in which they are open to attacks. Try to abuse this to put the Protoss farther behind.

As you are on Lair tech, a Muta switch is relatively easy to do. You need to add the Spire if the Protoss does manage to mix in Colossi with their army. When microing, make sure not to engage these Colossi with your Hydralisks, but rather try to pick them off with the Mutalisks. Getting a Spire leaves a small window in which you are vulnerable. While the Spire is morphing you save your gas and minerals for the Mutalisks, leaving you with less of a unit production. During this time play carefully.

Protoss takes an expansion instead of being aggressive[edit]

The 2 Gate Rush is a fast and powerful strategy against which you cannot safely expand. Instead, follow up thus:

You need the Roaches to be able to hold off Zealot pressure effectively. If you are sure you can kill your opponent skip Lair and keep massing Roaches. If you want to be safe (recommended) switch to mass Drones and only threaten an "all-in" with your Roaches. If you do not go all-in, and power Drones, transition into Hydras after Lair finishes.

NOTE: Timings are relative in this variation. With aggressive openings units will die.

If your opponent does not go for Cannon first, Overpool will kill FE on close positions. Otherwise you're left with the choice of powering Drones or Roach all-in. If you choose the first:

This build works well on maps where you can quickly reinforce your natural from your main. Additionally, the longer the rush distance, the better. Examples include, Blistering Sands, Lost Temple.

On a maps like Desert Oasis where your expansion is farther away, a different opening is generally advisable. As noted above, a short rush distance is detrimental to this build.