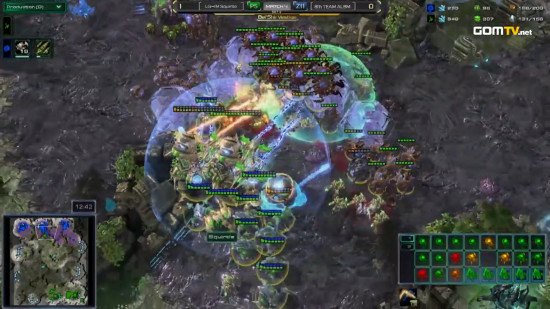 This guide includes two build orders. The first opens with Phoenixes to kill off scouting Overlords, thus preventing convenient Overseer scouting. These Phoenix also serve to pick off Drones that venture too far from Spore Crawlers, delaying the Zerg's production, and keeping him in the dark. Phoenix openers also tend to lull Zerg into a state of relaxed Droning, as these Protoss builds typically transition into a third base. The second the Overlords die, Protoss cuts right to the chase, pumping out Robotics units as quickly as possible for the earliest move-out timing. Another important difference between the two builds include Sentry and Force Field count, as the Stargate opener will have less gas available to invest in early Sentries, resulting in less energy in the final key fight.

Much like a Sentry/Immortal All-In, the 2-2-2 excels in small chokes to maximize the utility of Force Fields and to minimize the size of the Zerg concave. With the Immortal Push, Sentries are used to section off small portions of the opponent's army, but when playing the 2-2-2 you should use Force Fields more aggressively, preventing the retreat of enemy units from your powerful Colossi. It is also important to note that you have to end the game even faster than with the Immortal all-in because Zerg can easily defend if he is able to get up to mass Roach/Corruptor as they'll win with sheer numbers regardless of how good your Force Fields are.

Zergs generally want to use Hydralisks for safety because they transition more strongly into the mid game. Roaches are stronger against this push, but weaker against just about every other push, and also not as good to pressure a third base thanks to Void Rays and Photon Overcharge. Even if the Zerg scouts the Robotics Facility, they cannot assume that investing in Roaches is appropriate unless they know for sure that you are not taking a third base. So, while the Stargate opener hits later, the scouting information that it denies can make your push even stronger.

As with other PvZ all-ins, if Zerg scouts your quick Colossus tech, they can formulate a strong response. Pure Roach play, or circumventing the push entirely by using mass Mutalisks, have proven adequate answers thus far. Even though this build includes two Immortals, Roaches are stronger against it than they are against the Immortal/Sentry all-in because the Protoss won't have as many Sentries and so won't be able to divide up the Roach army as effectively. Because of this, large enough numbers of cheap Roaches are easily produced to deflect such a delayed push.