3 Hatch Before Gas (vs. Protoss) 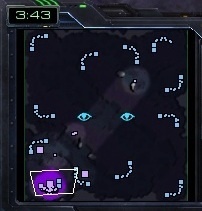 This build is the most common response to a Fast Expand from your opponent (generally either Forge Fast Expand or YufFE), and is currently the most widely used build versus Protoss. It delays taking your gas and unit production until the very last moment, taking advantage of the delayed Warpgate technology of your opponent. Should you scout a one-base play from your opponent, it is recommended not to plant your third Hatchery and diverge from this build, taking an earlier gas instead.

This build is designed to give you three saturated bases very quickly, while being safe against any timing attack from the Protoss player, in order to give you an economic edge over your opponent. If you are able to survive the mid-game pressure from your opponent, it is not too uncommon to be maxed on Roaches and Zerglings at the twelve minutes mark while transitioning to Hive Tech.

A Probe blocking your Natural's placement will always slow down your build, but there are several ways around it:

This build is surprisingly robust considering how economically oriented it is, and branches out in many different mid-game plans depending on what you will scout from your opponent. Versus a Protoss using a Fast Expand Build, you will have three ways to scout what your opponent is doing:

Assimilators at the Natural Expansion[edit]

One of your Overlords should be positioned at a position that allows you to see the geysers at your opponent's natural in order to see how many gases he or she is taking.

This will be your way to confirm the intuition you got from the two other scouting methods. You should not only look for the buildings (as those may be well hidden in a corner), but also count the amount of gas you see in your opponent's units and if possible look at the probe saturation (a low saturation suggesting an all-in).

Any map that allows for an easy third base (i.e. no rocks blocking the path to the Third or the Third itself) is a good map for this build.