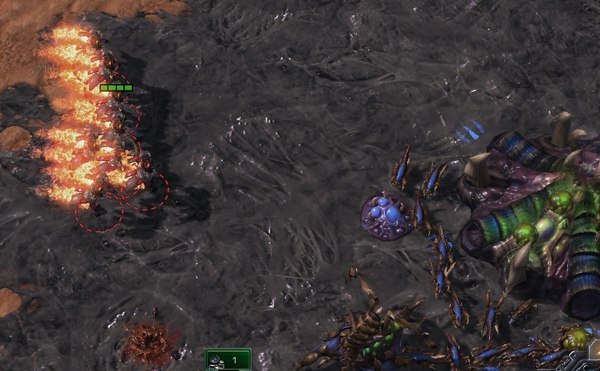 This aggressive opening attempts to put massive pressure on the Zerg early on, forcing the Zerg player to sacrifice their economy to hold off this build. The 5 Rax Reaper build came into notice during the 2010 IEM gamescom tournament, where it became a staple TvZ build. This is considered a more advanced opening build. The build became very popular to the point where many players were claiming imbalance because of the build. In response to this, Blizzard changed the Reaper in Patch 1.1.2, resulting in the decline of the 5 Barracks Reaper strategy. Dustin Browder has stated in an interview that, "It was a bit of a mis-step for us. The players showed us what it was capable of and we nerfed it into obscurity. This will be addressed in Heart of the Swarm." [1]

Your goal with this build is to either completely kill off the Zerg player, or to allow a safe expansion and transition into the midgame.

Generally by the time the first Reaper is out your scouting SCV has been killed, so you need to use this Reaper to scout as well. Immediately send the Reaper towards your opponents base and force back any Zerglings outside your base. At this point you want to confirm that that your opponent has an expansion or in the process of building one. You should not start harassing yet because the Zerg player will likely have Queens and a bunch of Zerglings. If you see that the Zerg player is not expanding quickly (such as mass Zerglings or 1 hatch Roach) you have two choices; try to Bunker up his natural (trapping him inside his own base) or Bunker your own choke point.

Once it has been confirmed that the Zerg player has an expansion, it is time to transition into the most important point of this strategy. Before moving on, you must know the technique of kiting with the Reapers when attacking.

Once you have your three Barracks up and running (two more should be currently building) and at least 4-5 Reapers it is time to put on the pressure. Your goal here is to force your opponent to sacrifice their economy as much as possible. Your opponent will likely to defend with Zerglings, Roaches and Queens. If you see Mutalisks your timing is likely to be off. Look for any openings inside the Zerg base (whether it is at their main base or expansion) and use the mobility of the Reapers to your advantage. Kill any stray units and keep forcing your opponent to go back and forth. Your goal here to keep picking off units, in particular Zerglings and Roaches.

The first rule is to only harass in areas where you can escape when the Zerg units arrive. This means do not move your Reapers into the back of your opponents base and do not go too far into creep. The second rule is to fight off creep because your Reapers can out maneuver the slower Zerg units. This means you need to initiate the fight on the creep and kite back towards the non creep area, while picking off enemy units.

Remember to keep reinforcing your Reapers from the 5 Barracks. If you control your Reapers well, there will come a point in time when you will have a critical mass (generally 12+ Reapers). This means that Zerglings will become much less effective as they cannot get a surround on your Reapers. If you managed to dwindle your opponents forces down enough, there may be an opportunity to push in and finish the game. But even you do not manage to get the kill, it is possible to transition into the mid game with the advantage.

Once your Reaper pressure becomes less effective you will need to transition into the mid game. This occurs once Zerg is able to push your Reapers back to your base. Since you are already on 5 Barracks, staying with bio is the logical choice here. Start to pump out Marines and Marauders and start your Factory tech and get Medivacs out as soon as possible. By now the expansion should also be up and your base is up to four gas.

Use the right combination depending on what the Zerg player does next. If your opponent:

Maps where there are many entry points where Reapers can access.

MorroW vs IdrA - IEM Cologne Grand Finals - This series was the conclusion of the IEM Season V - Global Challenge Cologne tournament, the event that gave birth to the popularity of this build.