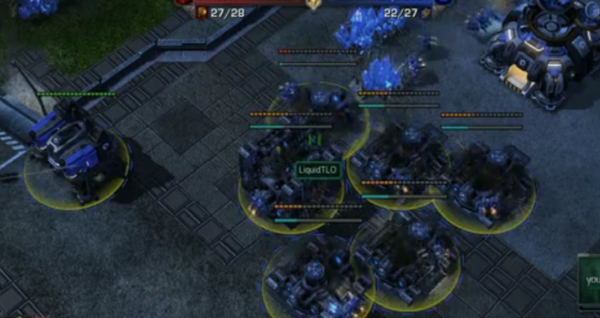 This is an all-in build which aims to kill a fast-expanding opponent before the opponent can reach a second tier of units . It relies on continual Marine reinforcements to cripple or outright kill the opponent. This build has small chance of being mistaken for a 1 Rax FE as there is no add-on on the first Barracks, with one Marine only, and the rest are placed well out of poking units sight range.

TLO used a 7Rax all-in against

IdrA at DreamHack Stockholm Invitational and against

ViBE in NASL 1 with great success but has since switched to 6-Rax instead.

Punish an opponent for opening with an economic build or any that cuts early army size. Your reinforcements effectively limit their ability to spend money on anything other than an army, where you have the initial advantage.

With economic builds becoming more and more standard and early safe all-ins by Terrans becoming more rare, it is good to have a couple of deadly all-ins that 'keep the fear alive' by severely damaging or outright killing the opponent's fast expand. Even if the rush fails, an opponent may be thrown off of their intended tech path or build order by having had to deal with your attack.