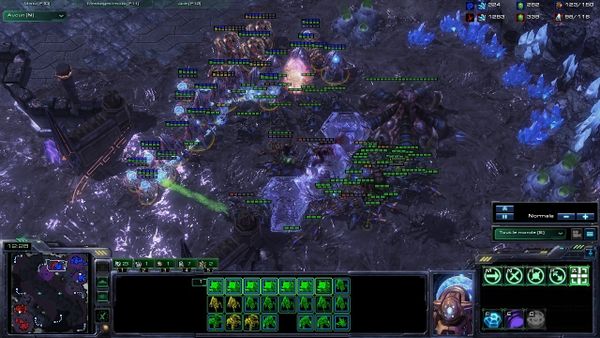 This two base all-in aims to kill the Zerg opponent's third base before they are able to tech towards Mutalisks or Infestors. It relies on two or three Immortals and a high number of Sentries that will be used to cut the opponent's army into pieces with Force Fields. Also of importance is a Warp Prism that will be used both for reinforcing your army and moving back injured units, as demonstrated by Squirtle in this game against BBoongBBoong.

Ideally, you want to make sure your opponent is not going for a two base all-in because your Gateways will not finish in time to defend against this. To scout for this, use your first Zealot to check whether or not they have a third base in production. If they are going for a two base opening then build two or three more Photon Cannons whilst continuing producing Sentries. After you're safe, continue with the build as best you can; if they opened with a two base build and you managed to defend their pressure, your Immortal timing-attack will be devastating as they will not have the economy nor the tech to defend against it.

If your opponent successfully stops your push then you will be in a very difficult spot. To be able to defend any counter-attack, you will have to start producing Immortals again and re-build your Sentries. With your Observer you will have to scout if they are transitioning into Mutalisks or Infestors. If they go for Mutalisks, build a Twilight Council and start researching Blink. If they go for Infestors, you will need to build Colossi. You should also be looking to take a 3rd base, although this can be hard against a Zerg opponent who didn't lose their own 3rd base during your push; for this reason, it might be better to max out on two bases and go for a Colossus-based all-in.

Since Robotic units (Immortals) cannot be warped-in, small maps with shorter rush distances are favorable for this build. Chokes also are advantageous as they lessen the number of Force Fields necessary to cut the opponent's army in half. The fewer open areas the better, since it makes your army harder to surround. Examples include Ohana, Antiga Shipyard and Cloud Kingdom.

If the distance between you and your opponent is too long, your opponent will have a lot of time to prepare their defence, making the push harder to execute. Large chokes also make it also difficult to trap units or to protect your units, and wide-open areas make flanks favourable for the Zerg opponent. A good example of a bad map for this strategy would be Atlantis Spaceship