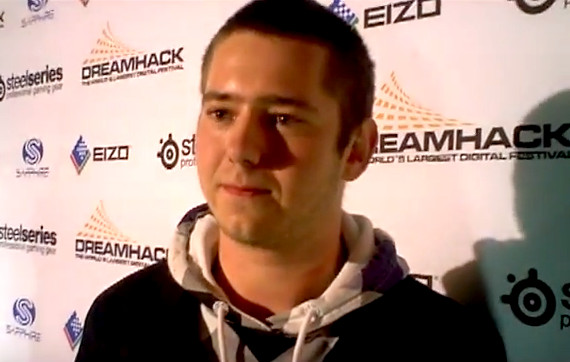 Lars "ActionJesuz" Krøjmand is a Zerg player from Denmark who is currently retired. He is notable for his performance in the DreamHack SteelSeries LAN-tournament and the subsequent Internet meme. ActionJesuz took the name from Kung Fu Action Jesus in Avatar: The Abridged Series.[1]

ActionJesuz played StarCraft II since the beginning of the beta, and has always played Zerg as his main race. Before the game's release, he played Warcraft III: The Frozen Throne and Counter Strike 1.6, but not at a very competitive level.

He was considered one of the top Zerg players in Denmark during the beta.

ActionJesuz participated in a Danish qualifier for the DreamHack SteelSeries LAN-tournament. In the quarterfinal of the qualifier he beat Eizcaj 2-1 in a ZvZ match. In the semifinals he met Protoss player Joe (notable for a top 4 finish in Competo Cup#6, Go4SC2 #43, and more)[2] whom he defeated 2-0. The final match was against Slrkrpaktdmf. He lost this match, but because Slrkrpaktdmf did not have time for the trip to Sweden, ActionJesuz ended up accepting the invitation in his stead and thereby got a spot as the Danish qualifier in the main DreamHack tournament.

At DreamHack, ActionJesuz gained infamy upon performing the 6 Pool rush nearly every game that he played (indeed, the only games in which he did not 6 Pool were those in which he instead used a 7 Pool). He advanced out of his group with a 2-1 record, beating the more known players LucifroN and NTT with his early cheese. His only loss at this stage was against TOP after abandoning his early Pool strategy. Having enough luck with his quick Pools not to be sent home, he clashed with Protoss player Tyler in the following game and suffered a 1-2 defeat against the American. The set he won was due to a successful transition out of his 7 Pool opening into burrowed Roaches.

ActionJesuz was invited to SteelSeries StarCraft II Challenge. There, he managed to take a game against Socke with an in-base proxy Hatchery but ultimately failed to make it out of the Ro 64 group stage.

His success with beating top players using a single all-in build has spurred a popular Internet meme. There are many variants, but central themes is a brisk Jesus trolling and word play involving his opening build (the 6 Pool rush).