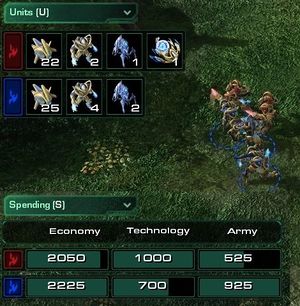 Using 4 Zealots and 2 Stalkers to attack. Blue is ahead in economy and army value.

The premise of this build is to utilize increased mineral mining as an advantage over your opponent during the early game, thus being able to expand safely against a 4 Warpgate Rush. The build revolves around delaying your first Assimilator (and Cybernetics Core) and not taking a second Assimilator until after you have a good saturation of minerals on your Natural Expansion. This build might not work in higher leagues (Master+), if the rush distance is too long. It was invented for maps like "Metalopolis" and "Lost Temple" (Close Spawn).

The basic build ends with researching Warp Gate at 4:54. If you play in the lower leagues, keep in mind that mimicking Adelscott with perfect timings is not easy. It takes practice to get the job done.

If your attack does enough damage, you can safely expand, while your attack is commencing. Note: Your troops may arrive later than 5:18, so your decision should be based on scouting informations.

Try to kill as much probes as you possibly can. An early Nexus is better than a late Nexus. If you dealt damage, only one cannon is needed. Do not skip this cannon!

Late Nexus at 8:41 - Adelscott plays this style against HuK on Metalopolis (see below). This followup is preferred if you unable to deal sufficient damage with your initial 4 Zealots and 2 Stalkers, and thus did not delay the enemy 4 Warpgate Rush. Even if your opponent loses a building like a Core, his attack can still be strong, by just warping in Zealots. Especially if your opponent has additional Stalkers (3 to 5) to support his attack.

Do not panic! Do not play safe, if you do not have to. An early Nexus and a strong economy is a big advantage.

As stated in "Notes" below, Timings are very important for this build. Day[9] talks about this build in "Day9 Daily #175 - Adel's No-Gas PvP" and shows two wins against HuK on Lost Temple and Metalopolis. Adel attacks on Metalopolis with

and kills probes and gets ahead (25 to 19). He uses the following timings to do so:

This Replay (see Replays below) is shown in a Day9 Daily, see References below.

Assumption: You have good micro and good multitasking skills, than you can attack earlier, if he plays a 4 Warpgate Rush and skips his initial Zealot. Since the goal of your timing attack is to deal economic damage, you can attack with your initial Zealot. If you think you can deal significant damage (kill a Pylon, or at least two Probes) then go ahead and Chrono Boost it out and attack. Oftentimes lower level opponents will skip their initial Zealot trying to get Warp Gate researched as quickly as possible, and this is exploitable by chronoboosting out your first Zealot and attacking with it. Your Zealot should be at your opponent's base between 4:00 and 4:15. your opponent's stalker will not be ready until 4:16. This timeframe is extremely close.

Do not try this, if

or if your unsure about your skills (Micro and Multitasking).

It is extremely important to focus on your Macro with this build. High energy (Nexus), supply blocks and too much resources indicate bad Macro.

Your early attack will reveal your opponent's tech path. Is he going for blink Stalkers? Do you scout a Robotics Facility?

Use your scouting informations to plan the next steps.

To execute this build properly your timings must be accurate. If you totally forget to Chronoboost, your Zealots will arrive 20 seconds later. This might make the difference if his Warpgates are ready or not. Try to arrive at your opponent's base before his research is done.

Once you headed off at about 4:40 to 4:50, you should rally your two Chrono-Stalkers onto your four Zealots. This way your Zealots should arrive at the enemy base before you Stalkers do, though your Stalkers will arrive as soon as possible. Adelscott usually hits the enemy base about 30 seconds with the Zealots before the Stalkers arrive. Once inside the enemy base your goal is to deal as much economic damage as possible. If you can kill off his only Stalker and proceed to wipe out Probes, that would be more beneficial than going straight into the Probe line allowing the Stalker to pick off your units. You need to make quick decisions on whether or not to focus down key Pylons (perhaps powering three or four Warpgates), kill off their army and then their probes, or just focus down the enemy Probes ignoring the current enemy army. This may take some practice, and it will help if you study some of Adelscott's decision making and mimic his play.

Ideally you will want to end up with a clear Probe count lead, resulting in the capability to both hold your expansion and eventually out-produce and overcome an opponent that tries to 4 Warpgate you to death.

You have a couple options while expanding. First, you can expand while you are attacking with your four Zealots and two Stalkers, following this up with two more Gateways and a Forge. This will allow you to have 4 Warpgates worth of production (to match your enemy's), along with a couple Photon Cannons at your natural. A single Photon Cannon is usually sufficient if you have been able to knock some Probes out. You really cannot skip this Photon Cannon! These Photon Cannon(s) are extremely cost efficient, so much so that a Photon Cannon will be able to protect your natural better than a Stalker, or a Zealot. The Photon Cannon is also great for detection against DT rushes or builds.

Your second option is to add on your two (or three - Adelscott often gets 5 Warpgates then expands) additional Gateways, and then expand. This delays the expansion but allows you combat a 4 Warpgate Rush if you weren't able to deal sufficient damage. Also, if you add on your Warpgates before expanding, in case you cannot hold your expansion, you can cancel the Nexus and fall back up your ramp. Worst case scenario: you end up with more Probes than the other guy, and 4 Warpgates. I would not recommend transitioning into 2 Gate Robotics, as you will not have the vespene to support robo units. Adelscott often constructs five Warpgates, so that with Chrono Boost and his Natural Expansion, your opponent will eventually out-produce an enemy four or five Warpgate Rush.

If you killed enough Probes and you get your Natural up and running, you can build a Robo. You have to take your gas earlier then. This very much depends on your scouting information.

Note: Oftentimes sufficient damage is not able to be dealt. In this scenario you need 5 Gateways with constant boost on your Warpgate research. While your additional Gateways are being constructed, use the completed Gateways to construct additional Zealots and Stalkers. You'll be able to survive then out-produce an ordinary 4 Gate due to your extra probes and Warpgates.

Since you'll be taking a very quick expansion, you'll have a greater income than usual, and as such you are allowed leeway in what you spend your money on. Since you already have a Forge, it's great to start chronoboosting +1 weapons once your Photon Cannon(s) are up.

After you have a decent saturation of minerals at your natural you can add on as many Assimilators as you like. A possible transition is mass Blink Stalkers followed by Archons. In this case you might like to add on all three Assimilators at once, and then throw down a Twilight Council. The Twilight Council is usually the best avenue to choose, if you like to harass with Blink. Keep in mind, that you already have a ratio of 3:3:1 in terms of Gateway units, the 1 being Sentries (explained in the #Key Notes section).

After a couple of production cycles, once your natural is fairly saturated, you should be able to dominate in a head on battle. From here, you can expand or tech to anything of your liking. One possibility is Blink Stalkers and about 4 Archons. The Archons are used to tank enemy fire (preferably Colossus fire), and do pretty darn well against Zealots due to splash damage. This goes great if the enemy went one or two base Colossus, since you can tank with the Archons and Blink into the Colossus to snipe them. This works well, as on two bases with Stalker production and 4 Assimilators as you'll have an excess in gas.

Another alternative would be to go with mass Warp Gates after you take a third base, and harass with multiple Warp Prisms, or just go in with one massive assault, Warp Prisming into the back of your opponent's base.

Due to patches, Protoss air tech has become much more viable to use as an integral portion of your army. Stargate transitions are extremely effective against Robotics Bay transitions, although it limits your detection to Cannons. Both Phoenixes and Void Rays are very effective. One or two Stargates may be added while on two bases.

Transitioning from this build is really open ended, as you should come out ahead against a 4 Warpgate Rush if you were able to successfully defend.

In lower leagues the rush distance might not be so important as in higher leagues. See the replay on Xel'Naga Caverns (below) for an almost perfect game - Blue does not lose a single unit. Take a look at your replays in PvP and you will know, if your opponent would be able to defend against this strategy. In lower leagues Adelscott is really strong against a 4Gate, if executed the right way. However, a close distance to your opponent helps a lot.

Conversely, maps with long rush distances, wide open natural expansions, or small ramps will all hinder your ability to mount an effective timing attack and defend your own expansion. Also, maps with a back door would be much harder to hold as two entrances to defend from would render the entire Cannon defense of this build obsolete.