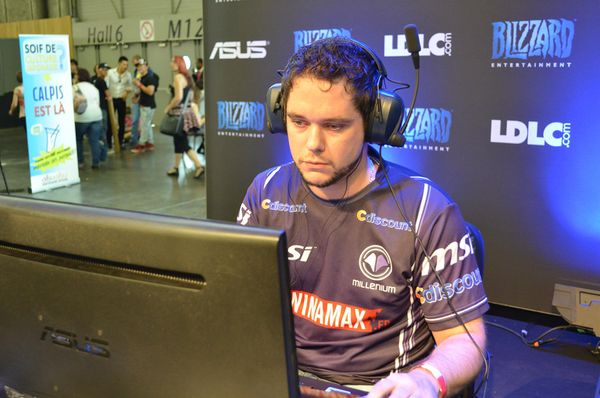 Benoît "Adelscott" Strypsteen is a Protoss player from France, currently retired. He played StarCraft: Brood War. He is considered one of the best French players. He first joined team wCrea and then switched to Millenium, which needed a talented Protoss player at the time.[1]

Adelscott is generally regarded as a thinking player. He has a slow game and tends toward a passive playstyle, relying on his macro skills. He is also known for his late scouting (the "Adelscout"), and for his overuse of Sentries and Force Fields.

During the StarCraft II beta, Adelscott took second place in the first ESL Materiel.net Cup and he won the third PwT Tour.

After the release of the game, Adelscott improved quickly. His first achievement was his second place in the nVidia StarCraft II GosuCup where he lost 3-4 against HuK.

Adelscott's skills began to be widely recognized in late 2010 and early 2011, both in French and European scenes. He managed to qualify for the final bracket of the DreamHack Winter 2010, where he lost against TOP in the quarterfinals after defeating White-Ra in the previous round. Meanwhile, Adelscott won the three first offline events counting for the Master Series : the PxL-Lan #28 and the Azerty Party 2010, defeating MoMaN in both finals, and the Spirit Lan 8, defeating ToD in final.

He then came to Finland to compete in the SteelSeries StarCraft II Challenge during Assembly Winter 2011, as an outsider. He was undefeated in his group stage, taking the first place before MorroW. Adelscott made his way through the main bracket, knocking out DieStar, but was stopped in semifinals by Ret. He eventually managed to get an unexpected third place by winning against Socke.

Two weeks later, he was eliminated for the first time of a Master Series offline event, losing 2-1 to his teammate ToD in the final of Atomic Re-SO 2011.

His fame jumped in March 2011, when he knocked Mvp out of TSL 3's first round. He then eliminated qxc, but was unable to take over Kas in the next round. Only two days before his victory over Mvp, he won the main French offline event, the Gamers Assembly 2011, defeating ToD, Strelok, and AureS.

Always willing to measure himself against the best European players, he participated to DreamHack Summer 2011, where he was eliminated in the group stages, still managing to win one game against MC. Adelscott also competed in HomeStory Cup III, where he narrowly qualified for the main bracket, after a difficult victory against Ret. Then, he sent White-Ra in the lower bracket in round of 16, but was outclassed by NaNiwa in the next round, and was immediately knocked out of the lower bracket by his teammate Tarson.

In July 2011, Adelscott reached the finals of ESL Pro Series France X, but was narrowly beaten by his teammate ToD. He then kept low-profile for the second half of 2011, his next appearance in a premier event being in the DreamHack Winter 2011, where he was eliminated in the first group stage. He later competed in the HomeStory Cup IV in January 2012, where he was swept in the first group stage, not winning a single game.

In November 2012 he participated in WCG 2012 where he defeated Fraer, ParanOid, KiLLeR, and JimRising to advance out of his group. In bracket play he defeated Fenix and LoWeLy to advance to the finals where he eventually fell 2-0 to PartinG to finish 2nd and win $10,000.