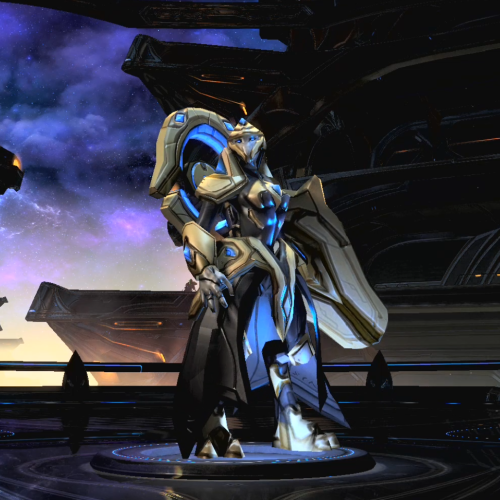 Adepts are "highly trained battlefield commanders", warped in at the Gateway after the Cybernetics Core has finished. They were first introduced in Legacy of the Void.

Despite their low rate of fire, Adepts can punch a hole through Lightly-armored targets. In addition, they can project a Shade of themselves, a controllable copy of the Adept that is immune but which exists for a brief time. Once this timer is up, the original Adept will teleport to the location of the shade, or the shade can be cancelled and preserve the location of the Adept. Due to the speed and immortality of the shade, this makes for an ideal scout. The ability can also be used for more offensive purposes. If the shade(s) are sent into the base of an opponent, it may require the opponent to split their army to deal with the possibility of the shade(s) expiring and the Adepts dealing damage. If Adepts are used for extensive damage-dealing, it may be desirable to research the Resonating Glaives upgrade from the Twilight Council, increasing Adept attack speed.

Two defining features of developed armies in Starcraft are either they are extremely mobile but lacking power or powerful with less mobility. Two Stargate units the Phoenix and Oracle can harass where Adepts cannot, all three combined are even capable of defending almost all threats from both Terran and Zerg from the early to mid game. See Versus Protoss for why Adepts are not common there.

Adepts have no anti-air attack and are commonly produced alongside Stargate units like a few Oracles and many Phoenix. Phoenixes can control the opponent's air units, and their harassment, while also having the Graviton Beam ability to remove Armored units into the air and leave the Light units to be cleared up by the Adept's bonus damage. Most common against Zerg and Terran.

The Shade moves faster than the Adept unit and can be selected and controlled. Shades can pass through units and Force Fields, but not buildings or other Shades. The Psionic transfer ability can be cancelled at any time before the teleport, when either unit is selected: when cancelled, the Shade disappears and the Adept stays in place and does not teleport.