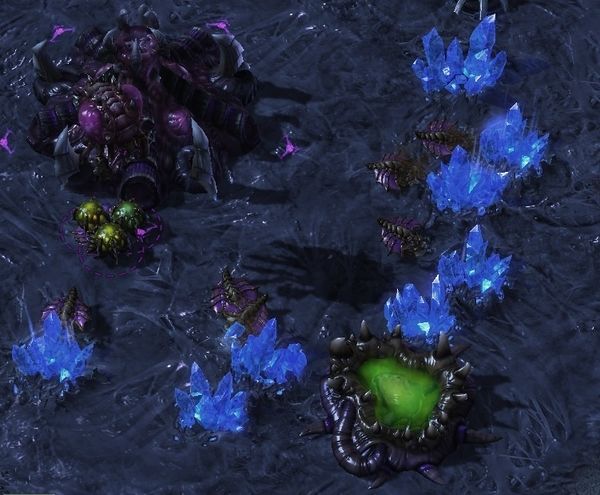 Aggressive Pool First refers to any build where the Spawning Pool is made before the first Overlord. It includes 5 variations that all end up at at least 10 Drones and 1 Queen for mass Zergling production; the only difference is the timings of the Zerglings and how much economy you will have for the follow-up waves:

To benchmark the different builds, gauge how much money you have for Queen (1), but spend all Larva on Zerglings after the Spawning Pool is complete until the Queen is finished, and the difference in timings is much easier to understand.

6-9 Pools aim to get slow Zerglings into the opposing player base before they finish Walling. 10 or 11 Over-Pools are still early but are more to deny cheese from map control; combined with an early Extractor timing, they make for a fast pressure and map control build.

Everybody who plays Ladder will encounter one of those builds sooner or later.

The only key difference in the variations, besides the number of drones and timing of Zerglings, is that a 6 Pool does not allow for an Overlord to be made before the Zerglings are ready.

10 Pool allows you to start your Queen almost immediately after your initial 6 Zerglings are made.

Essentially, you can add 7 seconds per Drone.

Gas timing is usually delayed until after you have made a Queen and a few Drones, which comes after your initial 8 Zerglings are already out on the field. Metabolic Boost is better timed for earlier than after the Spawning Pool as it takes a long time to finish.

If you are using this opening on a 4-player map, then you will need to send out a Drone to scout the other nearby location that your 1st Overlord didn't scout. Send out the drone when the Spawning Pool is ~50% done (earlier on larger maps, later on smaller maps) so that you will know your opponent's location when the Zerglings hatch.

The Over-Pool is by definition not an Aggressive Pool First build, since an Overlord is built right before the Spawning Pool is put down. However this build still allows for early lings to be built, and can be considered a balance between the economic strength of Hatchery First builds and the army strength of Aggressive Pool First builds. The goal of this build is to be able to adapt to early aggression, while also giving the possibility of an economically sound mid- to late-game. The early Pool also enables Zerg to punish economically greedy builds. The 11 Overpool version is more economical than the 10 Overpool version.

For 4-player maps, you need to send out a Drone scout before your Spawning Pool finishes, in order to see if the opponent is at the other nearby location.

This build works best against a Forge Fast Expansion opening, which is was considered a standard opening in WoL, but is not anymore in HotS. In HotS a Pylon-Gate-Expand like MSC Expand or YufFE is more common. 6 Pool is often used in lower leagues, though.

2-Player maps are generally not good, since your opponent is guaranteed to scout you before your Spawning Pool completes, and will have plenty of time to prepare.

In addition, some 4-player maps are so big that your first Overlord cannot scout a nearby location before your Zerglings arrive. Thus you are forced to guess which of the 2 remaining spawns to attack first, which, if you guess wrong, could lose valuable time.

Most 2-Player maps do not favor Forge Fast Expansion, and thus Protoss is less likely to choose that opening on 2-Player maps.

Maps that are so big that they give Protoss time to be able to complete his wall before your Zerglings arrive are also bad. The most prominent example of this is Tal'Darim Altar.