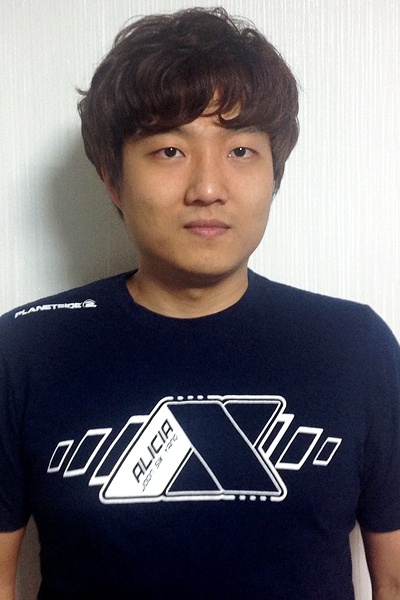 Alicia had a history with RTS games before he started playing StarCraft II professionally. He played Brood War since 5th grade, but stopped playing on ladder because of the prevalent use of map hacking at the time. He claims that while playing Brood War, he had never heard of the opportunity of being drafted for a Brood War team, and so he did not know much about the professional scene at that time. He later moved on to Warcraft III, concentrating on laddering. He had intentions of going pro with Warcraft III, but his plans were blocked by the South Korean mandatory military service.

Alicia decided to try out for SlayerS clan after hearing about the auditioning tournament. He arrived an hour late, and lost to LegalMind. However, Alicia was recruited into the SlayerS clan after BoxeR and Jessica saw potential in him. Alicia eventually became teamless in October 2012, as SlayerS disbanded.[1]

On January 14, 2013, Axiom recruited Alicia as part of its new engagement in the GSTL in partnership with Team Acer.[2]

Alicia did not qualify for the original three open seasons of the GSL, and as a result he first saw play after qualifying for GSL Code A in March 2011. His qualifications into Code A and subsequently Code S allowed him to compete in the GSL Super Tournament, where he reached the final eight as the last Protoss player in the tournament before being defeated by Polt.

During the March season, Alicia reached the semifinals, going undefeated before losing to SuperNova. This qualified him for the up/down matches where he defeated former GSL champion Mvp 2-1 to enter Code S.

Alicia was back in Code A in GSL October, where he lost 2-0 in the first round to SeleCT.

He once again qualified for Code A during GSL November.

Alicia's debut in Code S found him advancing in the top position out of his group stage, but he was defeated by LosirA in the following round. During GSL July he was bested by CoCa twice during the group stages, keeping him from advancing any further. Alicia again fail to advance past the group stage in GSL August as he went 0 - 2 in his group, being forced to play in the Up and Down Matches. There, he went 1-2 and dropped back down into Code A.

Alicia participated in 2011 MLG Anaheim in the open bracket.[3] He was knocked down to the loser's bracket already in round one by ToD with a 0-2 series loss. From there, he defeated Xeris, Scanemone and Temperament, all 2-0 wins, before rematching against ToD in round four of the lower bracket. In an extended series, Alicia was defeated 2-4.[4]

On July 22, 2012, Alicia participated in the 2012 MLG Summer Arena. Alicia was able to get very far in this tournament. Within his bracket, he took down Sasquatch, Ryung, HerO, Oz, and Oz again to advance in to the finals to face TaeJa. He lost to TaeJa by a score of 2-4 and ended up taking second place. At the 2012 MLG Summer Championship, Alicia defeated Leenock and PuMa in the group stage but lost to aLive, Leenock in the Group Stage Losers Bracket, and Heart in the Championship Loser's Bracket to take 13-16th in the tournament.

Alicia played in the qualifiers for the WCS America 2013 Season 1 Premier League on April 20–21, 2013. In the final rounds he defeated three Koreans, Zenio, JYP, and Revival to qualify for Premier League. He defeated North American Terrans Maker and Illusion to reach the Round of 16, where he played three Zergs. After defeating Sen, he lost to Snute but advanced after defeating NesTea. Alicia lost 1-3 to eventual champion HerO, but was able to play in the placement match to determine who would go to the WCS 2013 Season 1 Finals. He defeated mOOnGLaDe and Snute by narrow 3-2 scores to take fifth place and represent America in the Season Finals.

At the WCS 2013 Season 1 Finals on June 7–9, 2013, Alicia was placed in a Round of 16 group with Mvp, KangHo, and Ryung. He defeated both his opponents KangHo and Mvp 2-1 to reach the quarterfinals. He lost 0-3 to sOs in his second match and second loss against Protoss in WCS to fall out of the tournament.

Alicia's run in WCS America 2013 Season 2 Premier League was not quite as strong. He was able to defeat Terran players Neeb and Apocalypse in the Round of 32, but he lost to Polt and Jim to fall out in the Round of 16. Alicia lost yet again to a Protoss in HerO in Challenger League, and in a three-player group in the group stage, he lost to MajOr and teammate Heart to remain in Challenger League for Season 3.

Alicia was invited to ASUS ROG Summer 2013 on August 1–3, 2013. He defeated Diestar 3-0 and LucifroN 3-1 to reach the second group stage, where he defeated elfi twice to advance. Alicia defeated Happy in the quarterfinals but lost to eventual champion TaeJa to take 3-4th in the tournament.

Alicia played in the 2013 DreamHack Open: Bucharest on September 14–15, 2013, where he was seeded into the second group stage. He defeated Avenge, MorroW, and waCk to reach the third group stage, which he advanced from after defeating Dayshi and SjoW despite losing again to HerO. Alicia played against SuperNova in the quarterfinals, but was unable to advance after being defeated 0-2.