Disambiguation: This page is about the strategical concept referred to as "All-In". To see information about the last mission of the Wings of Liberty campaign click here.

The term All-In has its roots in Poker. A player who puts all of their money/chips into the pot on a single hand is going "All-In". Similarly in StarCraft, a player is considered All-In when he executes a strategy, usually a large attack that commits all their units, that has no planned follow-up.

Sometimes a BO is planned as an All-In (see Examples below), but on other occasions this term is relative to the state of the game being played. A player will sometimes go All-In if he feels like he is has no other options but to attempt to end the game quickly from his current position. This indicates a feeling of being behind in an unrecoverable way.

Or it is the other way around and a Terran decides to "pull the boys" and going All-In to end the game, like it is described in "The Big Boy Build".

All-In strategies generally have the aim of overwhelming an opponent who has gone for a standard strategy. By cutting economics and focusing entirely on unit production for a sustained attack, players can have vastly superior armies at points not previously attainable. Due to the loss in economy players will live or die based on whether the attack is successful or not. What is All-In for a player depends somewhat on the player's skill on both sides of the fight. A weaker player may not be able to capitalise on what would be considered an All-In attack and therefore the attack would be safer.

Since 2010 players throughout the leagues are playing All-Ins. Builds like 6 Pool or Proxy-Rax are considered Cheese. It's difficult to draw a line between the terms "Cheese" and "All-In".

111 was not necessarily an All-In, but in the following video SJoW (vs NaNiwa) pulls a lot of SCVs to support the attack. 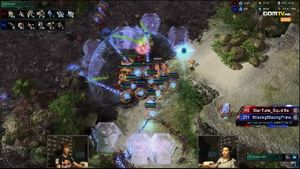 On Frozen Temple Dark showed a Ling-Ravager-All-In (vs Neeb), which could not kill the Protoss. But Dark is so much ahead after his attack, he wins the game within 10 minutes.

Many viewers are quick to call All-In in cases that aren't necessarily All-Ins. Being All-In is context reliant and cannot usually be pin-pointed without sufficient information. For example:

One base, or low-econ strategies are often incorrectly referred to as All-In. If a one-basing player cuts economic growth to execute his strategy, and his opponent cuts military production to execute their strategy, both players are vying for a different type of advantage. Each has the potential to lose the game, but neither is necessarily an All-In.

Since the Meta-Game changed from 1Base-Play to strategies with a fast expansion, some people call a "3 Gate Robo" an All-In. 1Base-Play cannot produce as much workers as a player with two bases, but an early attack may deal damage (e.g. kill workers).

Because the term is used so loosely, and has become so common, many players will simply use the term to classify an offensive strategy that they were unprepared to defend and hence lost the game to. Example: "Oh, yeah, I lost. He Roach All-In'd me," or "he did the Raven-Banshee-All-In." Players will crutch their losses by referring to their opponent's strategy as All-In, oftentimes incorrectly, and has thus the term has begun to develop a negative connotation similar to the term Cheese.