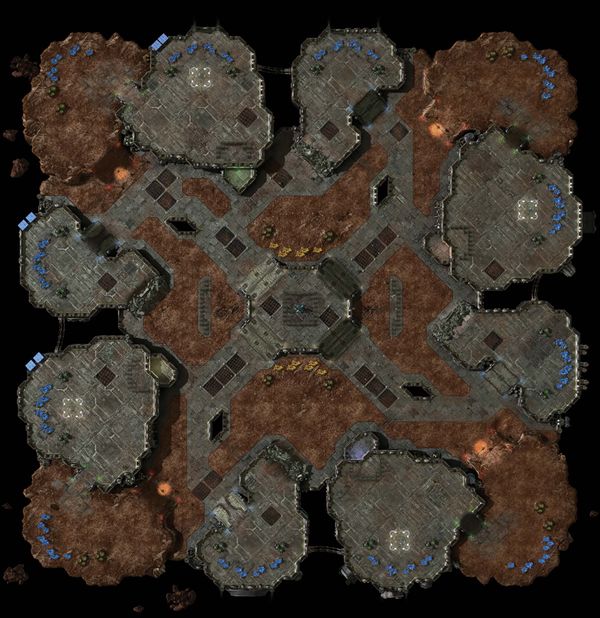 Antiga Shipyard is one of the four-player maps introduced for Season Three of the Blizzard ladder. It was also introduced into the 2011 GSL August map pool and was kept in till Season 5 2012.

Taking the correct 2nd expansion is the main difference on this map. Choose between the safer, high ground normal expansion or the more dangerous but more rewarding high yield expansion.

Antiga Shipyard has been included into the MLG Orlando 2011 map pool, with the removal of MLG Testbug.[1]

The following changes were made to the MLG version:

This map version is used in other professional tournaments, notably GSL and IPL.

"Deciding where to send your first Overlord is a bit tricky, there are several tradeoffs you have to make. I opt to send it towards a natural for a couple of reasons:

The downside is not knowing the exact timing the gas and spawning pool were put down. These are easy to figure out if you scout a main first. The second overlord can take a small detour to check for an enemy overlord (to determine location), then head towards the center to spot for incoming attacks.

Getting from one main to another takes long enough to nullify any threat a 10pool or 7pool may pose on a standard 14gas14pool build. These aggressive builds make sense only if you're certain you're facing a fast expand and you're willing to go all-in. Antiga Shipyard is a great map for fast expands, so it may pay off to all-in every now and again.

Your natural is very close to your ramp, making it fairly easy to defend a fast expansion with roaches. The better you can create walloffs and tight funnels, the more cost efficient your Roaches will be when facing Zergling aggression.

Mid and lategame Zerg vs. Zerg plays out similarly to Tal'Darim Altar. Mutalisk transitions give you a lot of map control and Ultralisk/Infestor is the endgame goal, decimating roach armies when engaged in the open."

"Antiga Shipyard is a fairly decent map for 2rax play. The mains are far apart, but the naturals are close enough to put marine pressure and the barracks can later be used to wall off an expansion. I'm usually a fan of Speedling openers when chances are a 2rax is coming my way, but on this map it's better to bite the bullet and go for a fast Hatchery. Because Terran can either wall off or defend his expansion from a bunker next to his ramp, Speedlings won't delay his expansion long enough to even out the game.

Deciding on a strategy will depend on your spawning locations. While a fast Mutalisk opening does fairly well on any location, relying on just roach ling to fend off midgame tank pushes will be difficult if you spawn with your 3rd facing the Terran player. The distance to the ramp at your 3rd is short, it is difficult to get a surround, difficult to get creep spread and if that wasn't enough, tanks can hit the geyser at your 3rd while chilling in the main. Yeah. Don't go Roach/Ling and expand to your regular 3rd. If you want to delay Mutalisks or skip them altogether on these positions, a good choice is to throw down an extra hatch in your main instead of taking an early third base. Then get a large amount of Roach Ling Baneling. It's a unit composition that does very well against Terran in open spaces. From there on you're in a position to either attack the Terran if he's going for an early 3rd base, or to grab the gold base in the middle of the map.

You can either aim for an Infestor Ultralisk combo in the lategame, or transition from Mutalisk play into Broodlords. Staying on lair tech for the duration of the game can work, but I feel it's a little too easy to keep 3 bases defended against the type of aggression lair play relies on."

The choke at the natural is a little too wide for Protoss to forge walloff comfortably. However it's still possible to forge expand using walloff styles similar to those on Metalopolis, using the nexus as part of the wall. Other typical builds as 1gate or 3gate expand work just as well. When you're not really sure what Protoss opening you're facing, going for a 14pool expand is your best bet. Economic, yet flexible and safe.

As there's not much opportunity for aggression as long as the Protoss sticks to 2base on this map, focus on getting a strong economy yourself to maximize unit production later on. Once Protoss pulls up his 3rd base, you have to be in a position to do some damage, or you'll have a hard time sticking in the game. Unlike the natural, the 3rd base has multiple attack routes and has quite some distance between the main by ground. This allows you to split up the Protoss army and force him to engage in areas more open and beneficial to the Zerg army. The green area is the only place around the Protoss base you'll typically want to have a large engagement at, the red are there to split up the army and engage in small skirmishes.

Because blink Stalkers do very well fending off Roaches, Hydralisks and Zerglings by blinking up and down the edges of the bases, it's a good idea to mix in some Infestors when you attack. Alternatively, Baneling drops are a great complement to your army when facing Stalker groups. 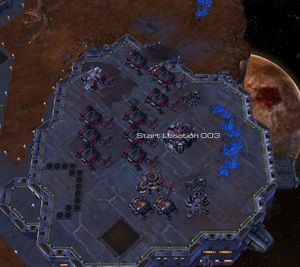