Assimilator (Legacy of the Void)

This article covers the current multiplayer version of this building. For another version see Assimilator (Wings of Liberty and Heart of the Swarm). 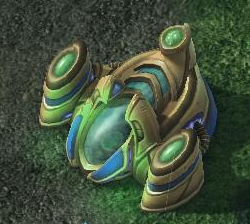 The Assimilator, a Protoss structure that can only be built on top of Vespene Geysers, allows the player to collect Vespene Gas. Probes sent to an Assimilator will return Vespene Gas to the nearest Nexus. The Assimilator is equivalent to the Terran Refinery and the Zerg Extractor, but has significantly higher endurance.

The Assimilator is one of only three Protoss structures that does not require a Psionic Matrix in order to be warped in or operated. (The other two are the Nexus and the Pylon.)

The most efficient way to harvest Vespene from an Assimilator is to assign exactly three Probes to it. A worker count text is displayed over the Assimilator. It turns red when the worker count is higher than three.

The timing of when to build Assimilators and transfer Probes from mineral gathering to Vespene is an important strategic consideration. Many Build Orders will specify when to build the first or second Assimilator, and the player must also carefully balance mineral and gas needs during mid-game transitions.

Like its Terran and Zerg counterparts, players will sometimes build Assimilators on the Vespene Geysers in their opponents' base, usually in the early stages of a match. This maneuver, called a "Gas Steal," provides several competitive benefits including a delay in the opponent's ability to gather Vespene. The Probe's ability to begin warping in an Assimilator and then immediately continue scouting makes the gas steal somewhat easier for Protoss players.